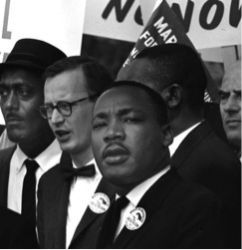 The 50th anniversary of the historic March on Washington will take place on August 28, and both CNN and PBS have planned televised specials to celebrate the milestone, according to an article on EURWeb.com.

On August 23, CNN will air an original documentary, “We Were There: The March on Washington — An Oral History,” with interviews and first-hand accounts. The documentary will air at 10pm, 1am and 4am, all ET.

On August 27 at 9pm ET, PBS will premiere “The March” narrated by Denzel Washington. Additionally, the week of August 28 PBS has planned a full-week of programs, including online events such as “The March @50” five-part web series.