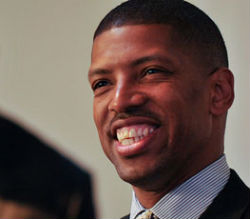 Sacramento Mayor Kevin Johnson was reportedly a speaker at the recent annual convention of the National Newspaper Publishers Association, where he warned of a crisis in the education of African-Americans, according to an article on NewPittsburghCourierOnline.com.