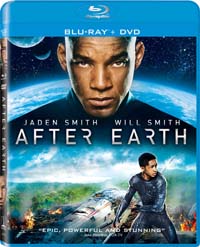 by contributing writer Michael P. Coleman
Will Smith and his son Jadenʼs would-be summer blockbuster, Sonyʼs “After Earth”, has just been released on Blu-Ray and DVD. Having just seen it, I have great news if you want to see the elder Smith in an exciting, action-ﬁlled, sci-ﬁ movie: “Independence Day” has been beautifully remastered on high deﬁnition Blu-Ray and DVD, and is available via Netﬂix. Contrastingly, “After Earth” is a slog.
Directed by M. Night Shyamalan, the ﬁlm features the Smiths playing father and son in this futuristic, post-apocalyptic mess. The over achieving, legendary dad is hard on his less incredible son, and the seams in the relationship show from their ﬁrst scene together. We get nary a glint of Charming Will, the persona he plays most often (and most successfully) on ﬁlm. Instead, we get a scowling, raspy-voiced father to play against the softer, insecure son (who morphs into the enraged, bitter son quite quickly), paired with the gentle, understanding wife and mother. Theyʼre all archetypes weʼve seen before — and in much better ﬁlms than this. Even the movieʼs James Newton Howard score is derivative, sounding like a cross between those from last summerʼs “Star Trek Into Darkness” and “Man Of Steel”.
Jaden took the brunt of the criticism about this ﬁlm when it debuted, but it wasnʼt solely his to shoulder. His father wrote a convoluted stinker of a story, which is part family drama, part action ﬂick, and part monster movie with a dab of environmental parable thrown in. Even considering the movieʼs often stunning special effects, “After Earth” is much more “Ishtar” than “Avatar”.
In a movie like this, you know youʼre in trouble when instead of cheering for the hero, you ﬁnd yourself thinking “Wouldnʼt it be cool if the monster just ate the kid?” The ﬁlmʼs climax was so unsatisfying I began writing the Shyamalan-esque “twist” I had been hoping for as the credits rolled. Would Willʼs character wake up in the shower and realize the whole story had been a dream? Is Jadenʼs character really dead the whole time, and he just doesnʼt realize it, yet?
Alas, no such luck.
Email Michael P. Coleman at mikelsmindseye@me.com or follow him on Twitter: @ColemanMichaelP