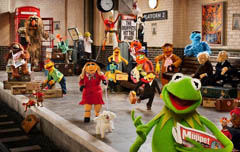 The late Jim Henson would be proud of Muppets Most Wanted, the eighth and latest addition to the canon of Muppet movies.  It’s a wonderfully funny family flick, which was a pleasant surprise given its PG rating.  This story opens, literally, just seconds after the end of 2011’s The Muppets, with the cast wondering about the next step in their careers after their return to prominence.  Ricky Gervais’ character convinces them to head off on a world tour, despite Kermit’s objections.  It turns out that the frog’s intuition was spot on, as — as they say in the biz — IT’S A PLOT!  Kermit’s soon kidnapped, locked up and replaced with a evil doppelgänger, Constantine, an international crook who’d broken out of jail.  The balance of the film’s hilarity involves Constantine’s interactions with the gang and Kermit’s travails in jail, along with the ensuring (and inevitable) prison escape attempt.

There are nods galore to past Muppet projects, most noticeably The Great Muppet Caper and the little-known television special The Great Santa Claus Switch.  Miss Piggy, Gonzo, Fozzie Bear, Statler & Waldorf and the rest of the gang are all here, along with newer additions Walter and 80s Robot.  Blink and you’ll miss a hysterical cameo from Kermit’s nephew Robin, along with equally funny appearances by a slew of the Muppets’ human Tinseltown counterparts like Usher, Sean Combs, Tina Fey, Lady Gaga, and Tony Bennett.

As in the last film, some of this movie’s songs are laugh-out-loud funny.  Miss Piggy’s tour-de-force, “Something So Right”, is the best outlet for porcine unrequited love since her debut single, 1979’s “Never Before, Never Again”.  She’s lost none of her, um…range over the years, despite some high powered vocal help from one of music’s reining divas.  “We’re Doing A Sequel” is the most self-deprecating song I’ve heard in awhile, mocking Hollywood’s penchant for replication and even the film’s studio, Disney.

While Muppets Most Wanted doesn’t have the nostalgic ring that 2011’s The Muppets had, it more than holds its own among Muppet projects — or any family project, for that matter.  The kids will love it, and there’s a ton of “in” jokes that only the grown-ups will get.  (Look for Fozzie’s hysterical hiding place and nods to Hollywood classics The Silence Of The Lambs and Gone With The Wind.)

So talk the kids into putting down the iPad for a couple of hours, grab some candy and popcorn, and let Muppets Most Wanted remind you of a time when a piece of green felt and a couple of ping pong balls, and his buddies, brought laughs to the whole family.

Muppets Most Wanted is playing at a theatre near you.  You can follow Michael P. Coleman’s fun and games at michaelpcoleman.com or on Twitter: @ColemanMichaelP