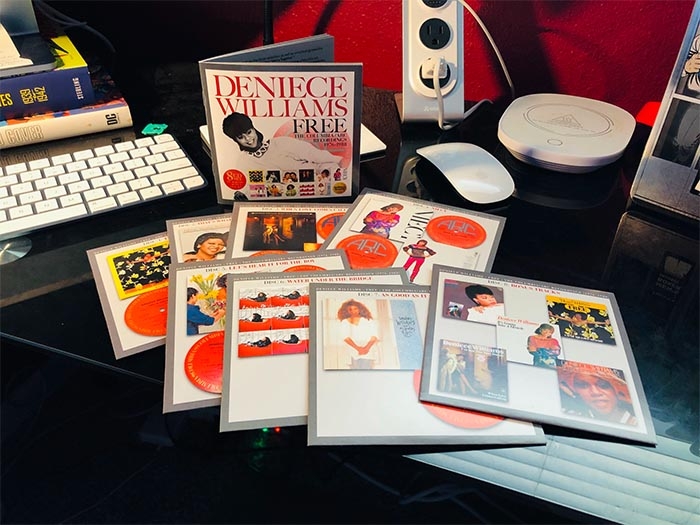 Last year, the British label Soul Music Records mined some of the best of one of our country’s musical treasures, Dionne Warwick, for a comprehensive box collection of her vintage Arista catalog.

That collection was a tough act to follow. But they’ve managed it with aplomb, as the legendary Deniece Williams herself always handled the mic, with Free: The Columbia / ARC Recordings 1976 – 1988.

All of the first 11 secular albums of Williams’ career are crisply remastered and presented in the new box set, buoyed by all five of the songbird’s crystalline, glass-shattering octaves. Williams deftly slid into the pop/soul landscape between Minnie Ripperton and Mariah Carey, with an upper range that was the envy of many an opera singer, while applying it to some of the best pop and R & B music of the day.

The new box set’s highlights include “Free” and “If You Don’t Believe” from her debut This Is Niecy album; “I Found Love” from the highly underrated When Loves Comes Calling; “Silly,” “You’re All That Matters,” “It’s Gonna Take A Miracle,” and “Waiting” from her pair of Thom Bell-produced masterpieces, My Melody and Niecy; and “Black Butterfly” from one of two George Duke-produced treasures, Let’s Hear It For The Boy.

Gospel music fans also have something to look forward to here, as Williams always included at least one spiritual song on her secular albums. The new box set’s sanctified highlights include the studio version of “God Is Amazing,” a highlight of Williams’ live shows to this day, from her sophomore Song Bird album; the anointed “Whiter Than Snow” from Let’s Hear It For The Boy; the original version of “They Say,” recorded with Earth, Wind & Fire’s Philip Bailey before Williams re-cut it with Contemporary Christian music’s Sandy Patti; and the Grammy-winning “I Believe In You” from her underrated Water Under The Bridge album.

Read freelance writer MPC’s full review of the box set, and find out how you can preorder your copy of the new box set, to be released July 2.