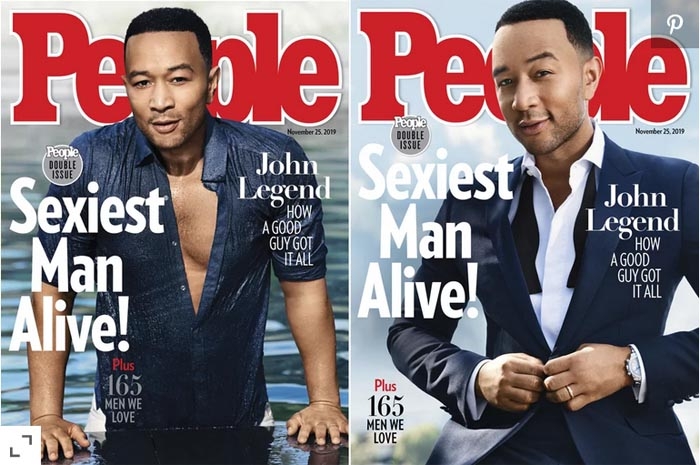 People Magazine has just caught up with the rest of the world and named singer / songwriter John Legend 2019’s Sexiest Man Alive.

Legend’s wife Chrissy Teigen let that ass out of the bag when she posted a bare-butt pic of her hubby on Instagram a few years ago. After I saw that, I’ve been waiting for Legend to give me the green light. But alas, he’s not made that call yet.

Like People Magazine, I’m late to the Legend party. I fell for the 40-year-old just a few years ago, when he opened for Sade on tour. It was the first time in years I wanted more of a show’s opening act. And that was before I’d seen his ass.

I was a huge fan of Legend’s 2018 Christmas album, A Legendary Christmas, and his accompanying throw-back NBC special, going as far as to say that his was a worthy successor to Michael Buble’s televised holiday parties from a few years ago.

But that holiday glow has dimmed with Legend’s recently released, expanded version of that album. It includes a few new “bonus” tracks, including a ridiculous version of the holiday classic “Baby It’s Cold Outside.” He’s rewritten the song, eliminating some of the “controversial” lyrics for the post-#MeToo era.

And in doing so, Legend has shown his ass — in a whole different way.

Click here to read MPC’s full take on the “Baby It’s Cold Outside dust up, and see the picture that launched 1,000…ships.  Yeah, let’s go with ships.