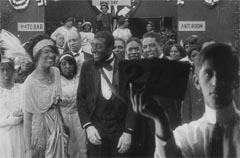 For decades, the seven reels from 1913 lay unexamined in the film archives of the Museum of Modern Art.

Now, after years of research, a historic find has emerged: what MoMA curators say is the earliest surviving footage for a feature film with a black cast. It is a rare visual depiction of middle-class black characters from an era when lynchings and stereotyped black images were commonplace. What’s more, the material features Bert Williams, the first black superstar on Broadway.

Read the complete article at The New York Times.