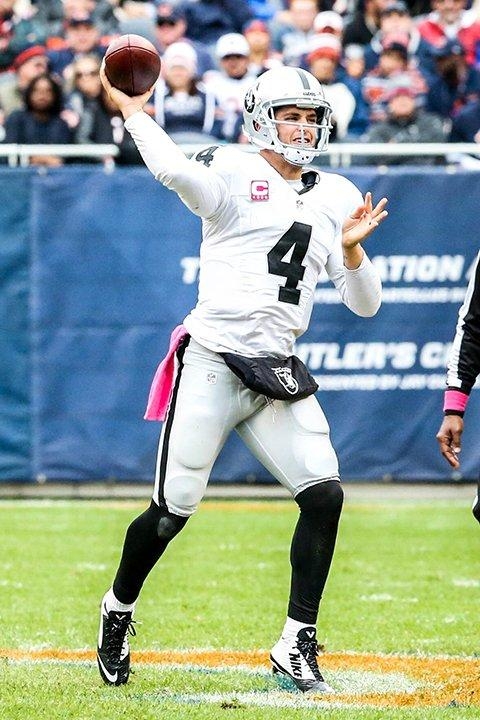 OAKLAND, Calif.-NFL teams stay in the scouting laboratory to find the next quarterback to become the face of the franchise, in which, one must be an eccentric individual in nature … and willing take complete ownership of any success or failure under his leadership command.

Derek Carr was able to say the magic words after throwing a crucial fourth quarter interception into the hands of Denver Broncos Cliff Harris. Harris made a game changing 74-yard touchdown return that eventually led frustrating 16-10 loss to the Broncos. “We have to continue to grow, and now!” Carr stated. The Raiders let another game slip away from their grasp to go along with the 22-20 loss to the Chicago Bears the previous week.
These are the types of words from a potential leader that create the synergy to get teammates to gravitate to and follow the urgency behind the statement of their quarterback. It clearly surmises Carr’s complete ownership in leading this organization back to a winning tradition, a tradition the Raiders possessed in the 1970s, ‘80s and early ‘90s.
When Raiders NFL Hall of Fame cornerback Willie Brown stepped up to the microphone at the 2014 NFL draft and announced Derek Carr with the 36th pick second round selection, they’ve actually found a commanding general to lead the team for many years in the future.
An NFL quarterback’s measurability comes in all forms, shapes and sizes, but Carr speaks the words like a US Army general who’s ready to win the war and has the tolerance to lose many battles along the way. “It’s really hard, Carr said. “There’s no moral victories for us, we fell we can compete against everybody, and we feel we can win games.”
This is a unique quality that only a rare breed possesses. As for Carr, he displays no exterior emotion, but the interior competitive behavior for winning manifests itself in his heart and eliminates all fear for the soldier who is willing to fight the skirmishes on the front lines.
“Look to me because I’m going to be the same guy and show them where to go. I take full accountability for this loss,” Carr declared. The Raiders are coming off two tough losses in back-to-back weeks and its record could have easily been 4-1 instead of a mediocre 2-3.
The bloodlines for the NFL quarter position are clearly defined in the Carr family tree. One must contend that success is only a matter of time, because Derek’s older brother, David Carr, was the first overall selection by the Houston Texans in the 2002 NFL draft. Eleven years older than Derek, David Carr will be able to provide his younger brother the additional mentoring, game preparation and leadership qualities needed to succeed in the NFL.
Derek Carr’s poise, brilliance and words of dedication all lead to the unequivocal brand of command for the Raiders’ success. His simplification of words allow any blame to fall on the big shoulders of the teams general in charge, and Carr a man’s man who uses words to point all fingers at himself for the good and/or bad success of the Raiders. “I always take full accountability,” he restated later in the interview in a clear but piercing tone of voice.
It may be too early to place a stamp of approval on Carr’s abilities to lead the Raiders to the Super Bowl, but one might say he’s shown some promise within a serendipitous body of work, and the Raiders’ future looks very bright at the quarterback position.