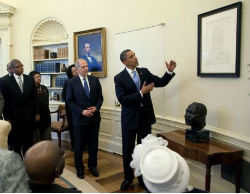 President Barack Obama marked January 1 as the 150th Anniversary of the Emancipation Proclamation, according to an article on BET.com.

According to the article, President Abraham Lincoln had issued the document on January 1, 1863, to declare all slaves in the Confederacy free.