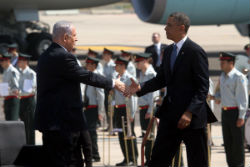 President Barack Obama made his first official visit to Israel today, according to an article on
NYTimes.com.

Obama was reportedly met by President Shimon Peres and Prime Minister Benjamin Netanyahu, and during his speech said he saw this visit as a chance to “reaffirm the unbreakable bonds between our nations.”

During his two-day trip, Obama will meet with Netanyahu and speak at the International Convention Center in Jerusalem.

On Friday, Obama will travel to Jordan.