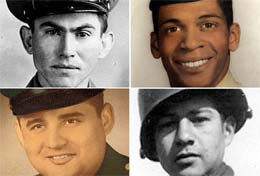 President Obama will correct a historical act of discrimination on March 18 when he awards the Medal of Honor, the nation’s highest commendation for combat valor, to a group of 24 Hispanic, Jewish and African-American veterans who were passed over because of their racial or ethnic backgrounds.

The unusual presentation will culminate a 12-year Pentagon review ordered by Congress into past discrimination in the ranks and will hold a particular poignancy when conducted by the nation’s first African-American president.  The group will comprise the largest group of honorees since World War II.
To read the complete article, visit the WashingtonPost.com