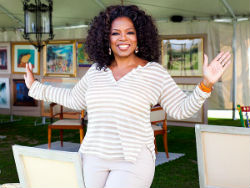 Oprah’s reportedly headed for the Great White Way!  According to the New York Times, she’s in negotiations to make her Broadway debut.  has championed theater in the past, and served as producer for Broadway’s The Color Purple in 2005. Now comes word that the showbiz and media icon is preparing to make her off-Broadway debut as an actress — in a Pulitzer Prize-winning drama.

The New York Times is reporting that Winfrey is in discussions to star opposite five-time Tony Award winner in a revival of Marsha Norman’s ‘night, Mother, as a woman trying to prevent her adult daughter from committing suicide. The play premiered on Broadway in 1983, and was revived in 2004, in a production starring and .

To read the complete article at USA Today, click here.