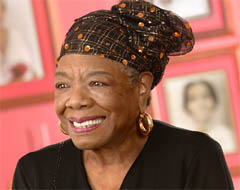 I am profoundly sad by the passing of Maya Angelou.  Her formal education ended when she was 17 years old, but she was one of the wisest people I know of and certainly the wisest I’ve ever met.

I found myself in Dr. Angelou’s presence at a “meet-and-greet” event after a talk of hers in Detroit, about 12 years ago.  During her address, she told a story of her parents divorcing when she was very young.  While she understood, she said, the pain that some children of divorce feel, she admitted that she had shared none of that pain.  In fact, she told the crowd “My parents did God and the rest of the world a favor when they divorced!”, to a riotous laugh from the audience.  She went on to give her opinion that some people really shouldn’t marry in the first place, independent of the circumstances in which they find themselves.  As I’d been grappling with the pain and guilt of ending my own marriage of 14 years, her comments were a first salve for me.

After Dr. Angelou’s curtain call, I finagled my way backstage and practically pushed and shoved to get to the front of the room, as I’d learned that she was going to address a few questions from the crowd.  As she entered the green room minutes later, a photographer from a local newspaper jumped up and began taking flash photographs of her.  For about 30 seconds, Dr. Angelou smiled politely and addressed the small crowd, while wincing each time a flash went off in her face.  Finally, she said “Pardon me” to the crowd, and turned her attention on the photographer.

The photographer offered “But I need to…”

“You need to listen to me,” Dr. Angelou interrupted firmly but without raising her voice.  “I’ve asked you to stop.  Anything other than doing so is disrespectful to me, and you’ve already disrespected my guests with that camera.   I will pose for as many pictures as you’d like to take AFTER I’m finished speaking, but you need to put the camera down — on the floor — now.”

The photographer sheepishly said “I’m sorry” as he placed his camera on the floor.

A few questions in, Dr. Angelou invited me to ask a question, and I told her of my struggle in moving on after my divorce.  I got a little choked up as I asked for guidance, and as she had with the photographer, she interrupted me, saying “Young man, you did the best you knew to do.  Forgive yourself,” adding, through a smile “God already has.”

“But you can’t do it over.  That’s the key,” Dr. Angelou replied, with eyes that seemed to mirror the tears in mine.  “When you knew better, you did better.  Forgive yourself, and live the life God’s given you.” I smiled and thanked her, she gave me a short hug, and she took the next question.

I will never forget those few simple words.  They seem much simpler in print, but the moment was transformative for me.  The slight applause from the crowd suggested that Dr. Angelou’s reply to my questions had struck a nerve with others in the room, as well.   She took a few more questions, thanked us all for coming, and prepared to leave — and yes, Dr. Angelou posed for several pictures, keeping her promise to the photographer, who’d stood quietly next to his camera for the balance of the evening.

I’d been a fan of Dr. Angelou’s before that night, having read I Know Why The Caged Bird Sings for the first time in high school.  I’d marveled at her recital of On the Pulse of Morning at President Clinton’s inaugural, and followed her for years on Oprah.  But I have carried her words with me for the last decade or so, and applied them to many challenging situations over the years.

This morning, having learned of her death at 86 years old, her words sustain me.  Again this morning, I smile through tears.

Michael P. Coleman is a freelance writer, based in Sacramento, California.  Reach out to him at michaelpcoleman.com, email him at mikelsmindseye@me.com, or connect on Twitter: @ColemanMichaelP