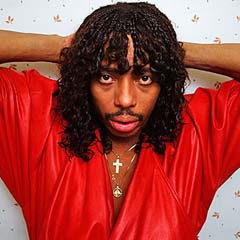 It’s hard to believe Motown superstar Rick James has been gone for ten years. At a time when the company was hemorrhaging superstars left and right, Rick James almost singlehanded propped the company up in the late 70s and early 80s with smashes like “You And I”, “Mary Jane”, “Give It To Me Baby” and “Super Freak”, while launching the careers of acts like Teena Marie (remember their scorching duet “Fire And Desire”?) and the Mary Jane Girls. He was every bit the talent that rivals Prince and George Clinton were, but somehow never quite got his due. If any talent was ever a candidate for TVOne’s Unsung series, it’s Rick James.

Sadly, if you ask anyone under 30 who Rick James is, they’re more likely to reply “I’m Rick James, bitch!”, echoing comedian Dave Chappelle’s 2004 parody of him, than to tell you he’s the artist behind one of Motown’s (and R & B’s) best concept albums, Street Songs, and it’s even better follow up, Throwin’ Down. That parody and the associated catchphrase, along with James’ inability to overcome his many demons, have all but overshadowed his amazing gifts and musical output. 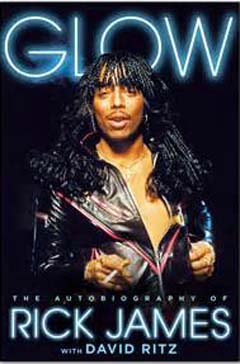 Additionally, author David Ritz has just released a gripping, sometimes disturbing but always honest autobiography, also entitled Glow, which he worked on with James for years before his death. Last year, Ritz jumped at the chance to revive the project and help restore the sheen to James’ tarnished image.

Surprisingly, Ritz told me by phone that he didn’t have any of James’ voice on tape to draw from.

“It was all my handwritten notes from interviewing him in jail. It was mainly him on one side of the glass and me on the other.  I wrote it — as I have all of my autobiographies — intuitively and impressionistically.”

That process has produced one of the most candid biographies — authorized or not — that I’ve ever read. It is absolutely on par with Ritz’ seminal Marvin Gaye biography, Divided Soul.  All of the details of James’ life are laid bare in Glow, from his very early introduction to sex and drugs, to his early jail stint for avoiding the draft, to his pre-funk musical incarnations that will surprise most, to his feelings about Prince.  James also details his battle to integrate early MTV during a time when they actually played music videos — exclusively by white artists.

“Rick’s family and estate has endorsed the book, and that gives me a lot of joy,” Ritz said. “They didn’t change anything or try to clean it up. They knew Rick was an extremely candid person, and that Glow is the kind of book he would have endorsed. He lived his life with nothing to hide, and just kind of put it all out there while he was here. I tried to show the complexity of his rich musicality. He was a brilliant artist and a highly intelligent man.”

Glow is available at retail and at iBooks.

Michael P. Coleman is a Sacramento-based freelance writer. When he’s not partying all the time, he can be reached at michaelpcoleman.com and on Twitter: @ColemanMichaelP