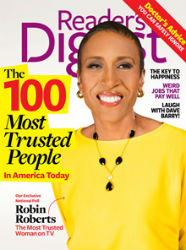 ABC’s “Good Morning America” Co-Anchor Robin Roberts has been named the most trusted woman on television by Reader’s Digest.

The magazine recently revealed its list of the “100 Most Trusted People in America,” which is the result of a nationwide poll to discover which public figures, and the ideals they represent, have earned America’s confidence.

The poll also revealed that first and foremost Americans trust people they know more than those who are famous — 77% of respondents named their personal doctors, followed by their spiritual advisers (71%) and their children’s teachers (66%) as those they trust the most.