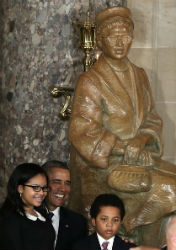 Last week, a statue of Rosa Parks was unveiled by President Barack Obama and members of Congress in the Capitol Building’s Statuary Hall, according to an artilce on EURWeb.com.

According to the article, the 9-foot statue shows Parks seated, commemorating the moment in December 1955 when she refused to give up her seat on a segregated bus in Montgomery, Alabama.

Parks is reportedly the first black woman to be honored with a full-length statue in Statuary Hall.