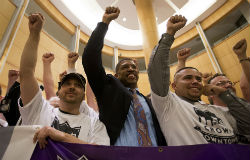 The Sacramento City Council voted 7-2 in favor of a nonbinding term sheet on a $448 million arena at Downtown Plaza, according to an article on SacBee.com.

According to the article, the city would contribute $258 million, most of which would come through borrowing against future revenue generated by downtown parking meters and garages.

The arena proposal, along with a bid to buy the Sacramento Kings team, will reportedly be presented in New York on April 3 to a committee of NBA owners who will consider that proposal alongside another offer from Seattle.