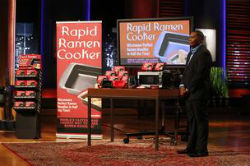 Sacramento inventor Chris Johnson — known for his Rapid Ramen Cooker — recently made an appearance on ABC’s “Shark Tank” and left with a deal, according to an article on the website of the Sacramento Business Journal.

According to the article, Johnson received a deal from Mark Cuban for Johnson’s copmany Rapid Ramen Inc., which already produces and sells its product at Walmart. Johnson reportedly countered Cuban’s deal, resulting in $150,000 for a 15 percent stake in Johnson’s company.