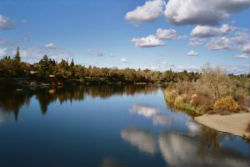 Sacramento’s urban forest and its management are one of the best in the US, according to a study released on February 5 by the nonprofit group American Forests.

Through a combination of an in-depth survey, independent data and a vote by a blue-ribbon panel of leading urban forest experts, American Forests named the 10 best US cities for urban forests among the 50 most populous US cities: Austin, Charlotte, Denver, Milwaukee, Minneapolis, New York, Portland, Sacramento, Seattle and Washington, DC.

According to a press release issued by the City of Sacramento, the panel recognized Sacramento for its strong volunteer base managed by the Sacramento Tree Foundation with thousands of individuals volunteering thousands of hours of work each year. Another contributing factor for the City’s high ranking is its documented knowledge of its tree canopy, tree species diversity, and age class range. In recent years, Sacramento invested in hiring a consultant firm to capture this data. The database includes the characteristics and maintenance history of all of its 100,000 trees on streets and in parks and cemeteries.

Click here to read a story on the report on USAToday.com.