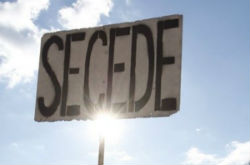 A growing movement spanning now 40 states across the nation asking President Obama to allow states to consider seceding from the union, according to an article in the Rosemont Patch.

As of 7:30am this morning, the online California petition had more than 10,000 signatures. The petition “asks the Obama administration to “peacefully grant the State of Califonria to withdraw from the United States of America and create its own NEW government.”

According to the Rosemont Patch article, the states involved – ranging from blue states like New York and New Jersey to some of the reddest of the red, such as North Dakota and Texas – must collect 25,000 signatures within 30 days to receive an official response from the White House. Texas reportedly already has more than 25,000.

Click here to read the full article on the Rosemont Patch.