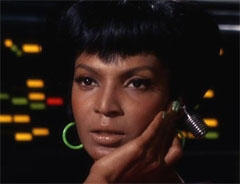 Nichelle Nichols has spent her whole life going where no one has gone before, and at 81 she’s still as sassy and straight-talking as you’d expect from an interstellar explorer.

“I don’t have enough sense to keep my mouth shut,” says the legendary Star Trek actor with a hearty laugh. “Whatever comes up, comes out.”

As the startlingly beautiful and fiercely intelligent Lt. Uhura on the hit 1960s TV series, Nichols was a revolutionary figure at a time when the only African-American women you saw on U.S. TV were usually playing servants.

Indeed, Star Trek was reportedly the only program Martin Luther King Jr would let his children stay up late to watch.

When Nichols was considering leaving the show to pursue a career on Broadway, King Jr personally implored her to stay, saying she was a powerful role model for black people across the country — and the world.