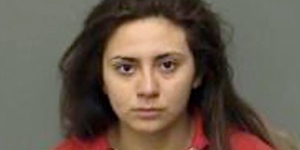 A teenage driver lost control of her car while she was livestreaming on Instagram and recorded part of the crash that authorities said Monday killed her younger sister in California.

After a gap in the livestream, the driver is seen leaning over the body of the girl, trying to shake her awake and saying she was sorry. She said she expected to spend the rest of her life in prison but doesn’t care.

“This is the last thing I wanted to happen, OK? … Rest in peace, sweetie,” the teen says. “If you don’t survive, I’m so (expletive) sorry.”

Authorities say Obdulia Sanchez, 18, was driving the car Friday when it veered onto the shoulder of a road about 120 kilometres northwest of Fresno.

She overcorrected, causing the vehicle to swerve and overturn into a field, ejecting her sister, the California Highway Patrol said.

Jacqueline Sanchez, 14, of Stockton died in the crash, Merced County Sheriff Vern Warnke said. Another girl, also 14, was in the backseat and survived with a leg injury.