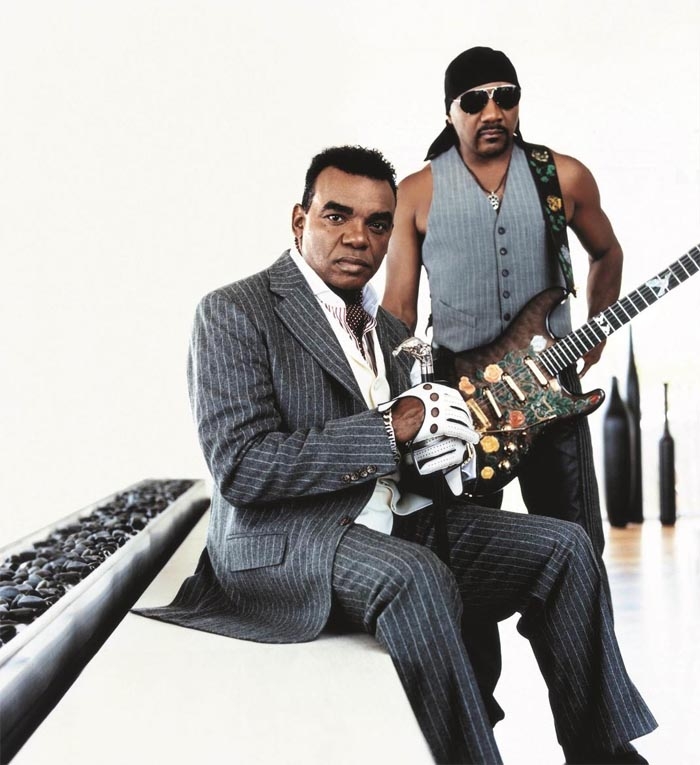 Ernie (on the right) and Ronald Isley of The Isley Brothers

If I had to sum up The Isley Brothers’ 60 year career in a single word, it would be this one:  ever-changing.

(Yeah, I know that’s two words… but a hyphen is a powerful, wondrous thing.)

So is The Isley Brothers’ contribution to R & B and pop music.  The group’s hits started way back in September of 1959 with “Shout,” and included more than two dozen gold, platinum, and multiplatinum singles, including “This Old Heart Of Mine,” “Who’s That Lady,” “Twist And Shout,” “Fight The Power,” “It’s Your Thing,” “Harvest Of The World,” “Work To Do,” and “Between The Sheets”.

The group just kicked off their You Make Me Wanna Shout 60th Anniversary Tour.  They roll into Modesto’s Gallo Center For The Arts on August 17.

It’s impossible to review The Isley Brothers’ catalog and not wonder about their almost-unprecedented ability to reinvent themselves with each passing decade.  And among contemporary acts, only Johnny Mathis has been at it longer.

Isley EXCLUSIVELY told me he’s honored to share the distinction with Mathis, but said that The Isley Brothers’ ability to refashion themselves sets them apart from even the iconic crooner.

“Mr. Mathis is Johnny Mathis, and he’s sounded like himself all of that time,” Isley said by phone on the morning after the tour’s first show.  “But our longevity has come from changing. We’ve worn a lot of different hats.”

50s rock and roll. 60s Motown. 70s funk. 80s “quiet storm.”  Isley may be on to something!  The group’s ability to ride the mercurial waves of popular music over the decades is chameleon-like.

The now 67 year old Isley cut his musical teeth very early, having been heavily influenced by Jimi Hendrix, who lived with his family for two years while Ernie was still in junior high school.

“My brothers hired him to play with the group, and he was with us — and lived with us — for two years,” Isley recalled.  “Whenever I would hear him playing, I would take my social studies book and go out and be with him, so I could see him practice and hear him play”.

“I really wasn’t doing social studies — I was checking him out!  He had a tremendous combination of skill and talent.  Nobody played like Jimi Hendrix.”

Isley soaked up everything he could from Hendrix during those two years, but it was José Feliciano, a few years later, who ultimately moved him to pick up the guitar for the first time.

“When I first heard José’s version of “Light My Fire,” that was the song that made me want to get a guitar,” Isley recalled.  “I was playing the drums at the time, and I had a recording session and I was going to be the second drummer on the record.”

“We got into the studio, and I showed the bass player what I’d played, having been influenced by José, and a few minutes later one of the guys asked me to play bass on the record.”

“My heart went into my head as he handed me the bass, and handed me the headphones as another guy yelled ‘Roll!’.  I held on for dear life, but I played it.”

Isley has been “playing it” ever since.

On the morning of our chat, Isley sounded a little groggy, and I learned it was because he, his brother Ronald, and the rest of the group had been partying and playing just hours earlier, during the anniversary tour’s inaugural performance.

“The audience was great. We had a great time,” Isley shared.  “If that first show was any indication of how things are going to go on this tour, I don’t know how much sleep I’m going to get!”

And The Isley Brothers are bringing all of that to Modesto on August 17.

“They’re gonna hear some of everything,” Isley told me, in anticipation of that Gallo Center performance.  “If people didn’t love us, we wouldn’t have been around for 60 years, so we’re gonna do it all.”

“There’s a lot of ground to cover, but the folks in Modesto are gonna hear everything!”

Click here for tickets to The Isley Brothers’ You Make Me Wanna Shout 60th Anniversary Tour performance in Modesto.  Use the code SCH15 for 15% discount on tickets.  The offer expires August 9.