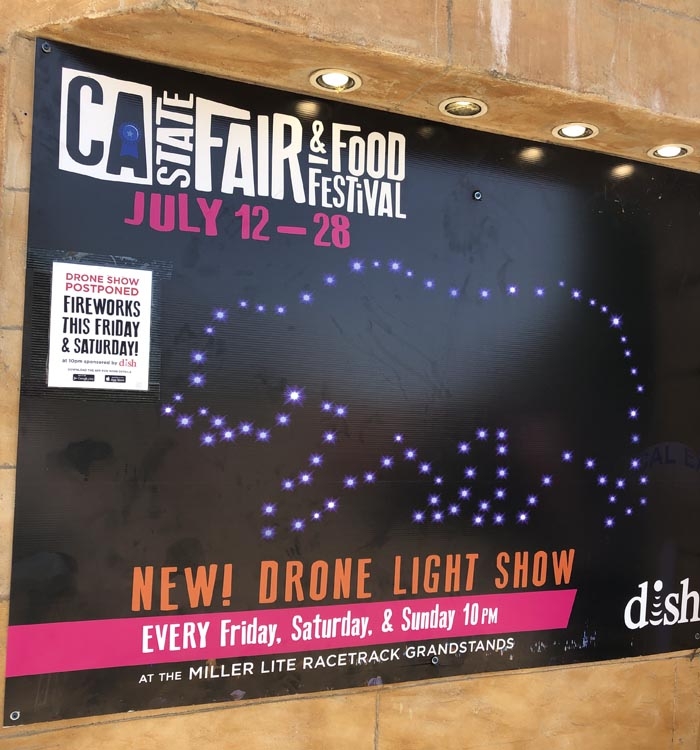 This year’s California State Fair & Food Festival kicked off with a lot of promise that has, very sadly, gone largely unfulfilled.

The event was rebranded this year to emphasize the event’s edible attractions — which is brilliant, given Sacramento is the farm-to-fork capital, but I wonder how they came up with that idea? — and they heavily promoted a new drone- driven light show to replace the traditional weekend fireworks show.

The drones have yet to take flight, reportedly due to technical problems, and with only one weekend left before the Fair ends, I wouldn’t hold onto hope of seeing them at Cal Expo before the end of the decade.

This year’s concert lineup, at least for fans of great R & B, is a little…lacking.  In recent years, stars like Jody Watley, Kool & The Gang, and Brian McKnight thrilled fairgoers.  This year, TLC cancelled their scheduled July 14 performance just six hours before showtime, allegedly due to Chili having lost her voice.  There’s some low-hanging fruit there, re: Chili’s “voice,” but I won’t go there.

Aw, who am I kidding?  Yes, I will.  Did Chilli ever have a voice?  We wish her the best for a speedy recovery, but she could have croaked through “Waterfalls” and given her fans something to jam to, and cancelling just hours before they were to have taken the stage was unprofessional.  Whatever happened to that show business axiom “The show must go on?”

I’ve heard absolutely no buzz about Sean Kingston’s performance last weekend, so the pressure’s on Tony! Toni! Toné! to save the day for R & B fans attending the California State Fair & Food Festival.  And aside from classic soul, the entire fair concert line-up this year is light, unless you count the heavy concentration of cover / tribute bands.

I’m sure they’re great, and they play most instruments better than I could, but the California State Fair has a reputation for presenting exceptional shows by legendary artists, and that reputation, for the most part, is not being lived up to this year.  I’m going to check out country star Martina McBride this weekend, but it’s a good bet that there won’t be a lot of melanin there — other than the star’s background singers.

(Have you ever noticed that there are so few Darius Ruckers and Kane Browns in the country world, but a lot of the genre’s headlining acts have African American background singers?  Things that make you go “hmmmm.”).

This year’s Fair food offerings look promising — there’s a new $28 Food Festival pass that’s available — but my fave thus far’s been the jalapeño-infused lemonade.  I’m not one to like fruit or veggies in my drinks — not even lemon in water — but Black JESUS why didn’t I think of this before!   It’s only about a 3 on a 1-10 heat scale, but it’s a refreshing 3!

I’ve been surprised by the lack of crowds at the Fair during the week, especially with the mild weather Sac has enjoyed this July.  Back in my home state of Michigan, the long-running State Fair was cancelled due to low attendance, so I’d hate to see that happen with the California State Fair & Food Festival.

The high temperature’s supposed to approach triple digits over the next few days, so let’s get out and support the California State Fair & Food Festival this week and weekend — even if we have to wear our earbuds and play our own music while we’re there.  And don’t forget to grab some of that jalapeño lemonade.

Tickets for the California State Fair & Food Festival are at castatefair.org.