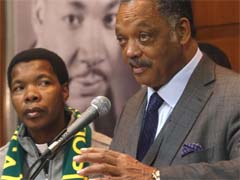 Three blacks and one Hispanic sit on the boards of 20 major technology companies.

That’s according to the Rainbow PUSH Coalition, which surveyed the companies.

In all, four out of 189 directors are black or Hispanic, the survey found.

Eleven of the 20 companies — including Facebook, Twitter, Yahoo, eBay and Google — have no one of color on their boards.

Just three companies — Microsoft, Oracle and Salesforce.com — have a black or Hispanic on their boards, according to the Rainbow PUSH Coalition.