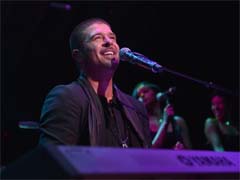 Last summer, Thicke reached a career pinnacle: His controversial single Blurred Lines had held the top spot on Billboard‘s Hot 100 for 12 consecutive weeks, while his album of the same name — released July 30, 2013 — would go on to debut at No. 1, selling 177,000 copies in its first week, according to .

But a mere 12 months later, the purveyor of blue-eyed soul has fallen far from his 2013 song-of-summer throne. When he and wife announced their split in February after 20 years together, Thicke embarked on a crusade to win her back by recording an album called Paula.

The heart-on-his-sleeve confessional was a far cry from the slick and danceable grooves provided by producers and on his last album, and fans’ lack of enthusiasm for the downbeat direction showed: Paula sold just 25,000 copies in its first week.