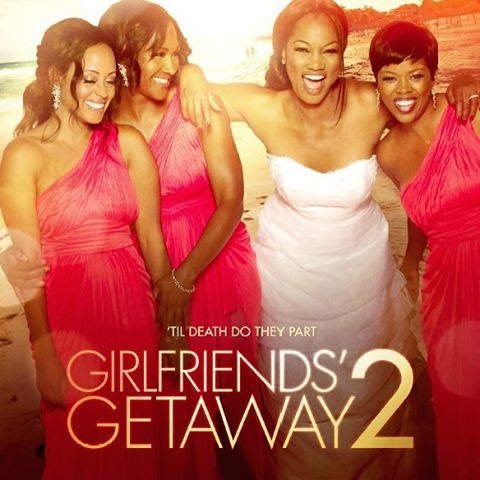 Network Comedy Sequel Featuring Garcelle Beauvais, Malinda WIlliams, Terri J. Vaughn and Essence Atkins, Premieres August 29 at 8 p.m. ET
SILVER SPRING, Md. – July 30, 2015 – PRLog — TV One’s (http://www.tvone.tv/) well-received 2014 comedy, GIRLFRIENDS’ GETAWAY (http://tvone.tv/ category/shows/ girlfriends- getaway/ category/shows/ girlfriends- getaway/), returns with a fabulous, fun-filled sequel and reunites original cast members Garcelle Beauvais (White House Down), Malinda Williams (Soul Food), Terri J. Vaughn (Daddy’s Little Girls), and Essence Atkins (A Haunted House) with an end-of-summer premiere on Saturday, Aug. 29 at 8 p.m. ET. Directed and produced by Roger M. Bobb (Why Did I Get Married?), GIRLFRIENDS’ GETAWAY 2 is about four girlfriends who travel to Puerto Rico for a destination wedding, only to face chaos when a simple affair turns into extravagant, expensive nuptials.
“While Cas Sigers Beedles and I were shooting the first GIRLFRIENDS GETAWAY in Trinidad last year, we knew then that a sequel was going to happen,” said Vaughn, who, along with Sigers Beedles, is also one of the film’s producers. “We had something special that needed to continue – the chemistry, genuine camaraderie, overall talent of the cast, and how we jelled – prompted us to start thinking about the storyline for GIRLFRIENDS’ GETAWAY 2.  Of course, the story changed about 1000 times during the process, but every great story does.”Following last month’s crowd-pleasing American Black Film Festival Alumni screening, TV One’s original movie GIRLFRIENDS’ GETAWAY 2 features Beauvais as Vicki, a 40-something successful  real-estate agent who is one week away from marrying her handsome, yet conservative high school teacher fiancé, Garrett, (Stephen Bishop, Being Mary Jane, Moneyball).  The low-key wedding turns into a disaster as best friend Camille, a freelance blogger played by Williams, loses sight of the true meaning of marriage and encourages her to kick-it up a notch for a four-page magazine spread.“Camille is much more driven in the sequel than she was in the first film,” said Williams. “Whereas she used to be the life of the party, she is now focused on her career, so much that she forgets the importance of her relationships. In GIRLFRIENDS GETAWAY 2, we see my character grow and evolve in her pursuit to find work-life balance.”Joined by Camille (Williams) and fellow best friends Sophie (Vaughn) and Lauren (Atkins) five days before her wedding, Vicki’s (Beauvais) intimate affair goes off-the-rails with the support of wedding coordinator Marie Nunez (Xiona R. Nieves-Vargas, En Busca de la Nueva Diva) as she upgrades everything – the food, venue, and even her dress – without consulting her fiancé.  “The adventures continue for Vicki Holmes,” said Beauvais when asked how her character evolves in the sequel. “She is newly engaged and really trying to figure out how to fit a man into her life. Thank goodness for her friends, who’ve got her back.”But the problems in Puerto Rico aren’t just Vicki’s (Beauvais) as Sophie (Vaughn), a fiery second-time mom, is on a mission to shed the baby weight, and manage her marriage to Kyle (Khalil Kain, Girlfriends). “Sophie is still learning to trust her instincts when it comes to love, the good and the bad of it,” said Vaughn about her character’s evolution. “She comes to take responsibility for the choices she makes and to embrace what those choices bring.  The beautiful thing about this group of friends is that they all realize they are all works in progress and will probably always be.  They learn to be good with that.”And Lauren (Atkins), a Zen-loving, free-spirited yogi attempts celibacy after a year-long self-realization journey, but finds it difficult when she meets Antonio (Eli Cay, The Preppie Connection). “Lauren continues to search for feeling complete and satiated without compromising all that she’s learned,” said Atkins. “She’s anxious NOT to repeat unhealthy cycles and to help her friends keep from doing the same.”GIRLFRIENDS GETAWAY 2 is complete with laugh-out-loud antics and “a-ha” moments as the fearless foursome come together to not only save the day, but to also save themselves.  It is a story that captures the true meaning of friendship as writer Cas Sigers Beedles can attest: “There is nothing like genuine love between friends, but love between good girlfriends is invaluable.  I enjoyed every moment of writing, producing, and experiencing this project. When audiences sit and watch this film, I hope it will make them laugh and share true moments that only good friends can understand.”GIRLFRIENDS GETAWAY 2 is directed by Roger M. Bobb and written by Cas Sigers Beedles. It is produced for TV One by Bobb, Angi Bones, Cas Sigers Beedles and Terri J. Vaughn. For TV One, Lamar Chase is producer, Tia A. Smith serve as executive in charge of production, and D’Angela Proctor as Head of Original Programming.About TV One:Launched in January 2004, TV One (www.tvone.tv) serves 57 million households, offering a broad range of real-life and entertainment- focused original programming, classic series, movies and music designed to entertain and inform a diverse audience of adult Black viewers. The network is the exclusive home of News One Now, the only live daily news program targeting Black viewers.  In December 2008, the company launched TV One High Def, which now serves 14 million households. TV One is solely owned by Radio One [NASDAQ: ROIA and ROIAK, www.radio-one.com] , the largest radio company that primarily targets Black and urban listeners.
CAST & CREW AVAILABLE FOR INTERVIEWSSCREENER, PHOTOS & CLIPS AVAILABLE
ContactBrandii Toby-Leon