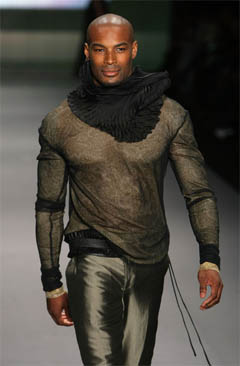 Male supermodels Tyson Beckford and Marcus Schenkenberg stopped by HuffPost Live on Thursday to chat about their participation in the first-ever Supermodel Cycle, which benefits the Boys and Girls Club, and how they’ve managed to stay so fit and fine over the years.

“Out of all the industries I find — me personally and I think that a lot of people will agree with me — that fashion is very racist,” Beckford said during his visit to HuffPost Live.

“This past season during fashion week, you might go to a show and it’s all white girls. Not one Asian or Black or Latino girl was in it. It kind of makes that ethnic race of people feel like they’re not important or being catered to,” Beckford said. “There’s more diversity needed in it. But fashion is the most racist business out right now.”

He and other supermodels, including Naomi Campbell, have formed the Diversity Coalition in an effort to foster cultural inclusion in the fashion and modeling industry.