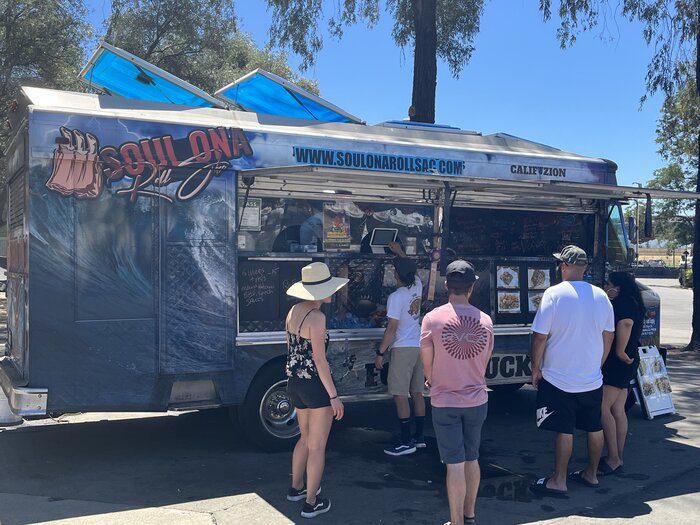 The California State Fair & Food Festival runs through Sunday, July 31. If you’re not booked, get over there and check out Soul Ona Roll Sac, for some of the best shrimp and grits this side of Louisiana.

Tony Ransome launched Soul Ona Roll Sac in January. After years of working for someone else, Ransome decided to invest in, and trust in, himself.

“After COVID hit, my son, Jahi, and one of my friends just kept telling me to do something for myself,” Ransome recalled by phone. “I had been operations chef for [local restaurant] Dos Coyotes, and working with the corporate chef, whose passion kept driving me to do more.”

“But my son lit the fire, and I just needed that push.”

The restaurant business, it seems, is in Ransome’s blood. Ransome’s Uncle Jesse also helped inspire the restauranteur, with his own landmark site in Ann Arbor, Michigan, Mr. Ribs. Longterm plans for Soul Ona Roll Sac include getting a fleet of trucks on the road and, eventually, a brick and mortar location.

With only six months behind him, I wondered how Ransome got Soul Ona Roll Sac into the California State Fair & Food Festival. The event has a long history of bringing in superb food vendors from all over the country.

“Everyone was hustling to reopen stuff, and [the organizers of the Fair] were trying to find food vendors,” Ransome remembered. “I was looking for venues, having just opened the business. I knew that there would be fewer Fair vendors this year. I applied early, and got picked.”

Ransome said that he told the Fair organizers that he wasn’t “wrapping anything in bacon,” and as such, his Fair fare might be a little different than what folks might expect.

Nothing could be more true: the shrimp and grits are out of this world. However, I learned that another of Soul Ona Roll Sac’s menu items has outsold the prawns at the Fair.

“A lot of people don’t do shrimp and grits,” Ransome laughed. “I spend a lot of time explaining to people what grits are! Thanks to the Sac Bee [who named Soul Ona Roll Sac this year’s best food truck], my biggest seller is the beef rib.”

Word on the street is that Ransome’s beef ribs go down best with his greens. In the spirit of true investigative journalism, I trotted over yesterday for an early dinner, only to find out that the greens were sold out! I’ll head back over — albeit a little earlier, today! — to check those out.

While I’m there, you’d best believe I’ll grab a wine slushee to wash the ribs down. I can’t even tell you how well the mango strawberry moscato slushee washes down a bowl of Ransome’s shrimp and grits, so I can barely wait to pair the heavenly beverage with Soul Ona Roll Sac’s beef ribs. You may want to grab one of those slushees early, too, as they’re prone to sell out, as well!

Ransome confided that the Fair crowds are a little thinner this year. He attributes that to this being the Fair’s first year back in two years, and possibly to the Sacramento summer heat.

But that just means you won’t have to wait long for your ribs. Or your grits. Or your wings (oh, my God get the mango habanero dipping sauce for those).

As you only have a few more days to catch Ransome at the California State Fair & Food festival, you may want to head over to 750 Richards Boulevard in Sacramento, which has been dubbed Food Truck Alley. There, you can find Soul Ona Roll Sac along with two other food vendors, Concrete Kitchen and Kitchen 916.

See you at the California State Fair & Food Festival!