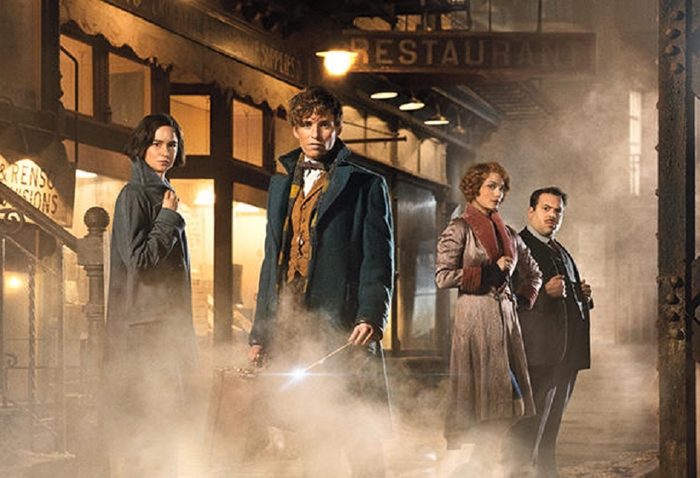 Fairly early on in JK Rowling’s enchanting Fantastic Beasts And Where To Find Them, a non-magical character, or NoMag, admits that the wonder he’s witnessing is beyond his mortal scope.

“I don’t have the brains to make this up,” he admits.

Rowling has once again proven that she’s gifted with a gloriously unbridled imagination.  She’s this generation’s George Lucas, crafting a world and cast of characters that are unbelievably engaging while launching Hollywood’s latest blockbuster franchise.  With this newest entry to her universe, Rowling has done the impossible…no, the magical:  she made me care about her world again.

The first time around, with the initial Harry Potter and the Sorceror’s Stone novel, it took me forever to plow through the book’s first 40 or so pages.  Eventually, the Harry Potter novels and movies that followed swept both my eldest daughter and I up, and we’ve a decade or so of shared memories that only a red-headed singing mermaid can trump.

That eldest daughter is all grown up now, so without a little one to nudge me to the theatre, I decided to let Fantastic Beast‘s opening weekend crowd have their moment, and I waited a few weeks before heading out to see the film last night.  Although it was a Friday, I figured the theatre would be empty.  By the time the lights dimmed, the theatre was half full, and it was clear that most of the other folks had already seen the movie at least once.

Once you see it, you’ll understand why.  The clunkiest thing about Fantastic Beasts And Where To Find Them is the film’s title.  The CGI and other special effects are off the charts, and the character’s charm sneaks up on you.  Before you know it, the teams are drawn and you’re rooting for the good guys with wands at the ready.

The entire cast, which includes Eddie Redmayne, Katherine Waterston, Alison Sudol, and Dan Fogler in the principal roles, give impressive performances.  Colin Farrell also delivers, and almost steals a scene or two.  But the real stars of this show is the wonderful, escapist story itself and its jaw-dropping special effects.

I’m being purposefully vague about details of this movie’s plot, as I despise spoilers and there are at least a couple of “oh, wow” moments to be enjoyed by the Potterverse’s rabid fans. The film’s title itself is a bit of a spoiler.  A cadre of “fantastic beasts” has been accidentally released in 1920s-era New York City.  Trust me: we’ve not been as captivated by a bag since Mary Poppins flew into town.

The kids will love this movie, but much more importantly, you will too.  If you need an escape from the realities of Trumpland, go see Fantastic Beasts And Where To Find Them.  But hurry up!  JK Rowling and Warner Bros have four more forthcoming films in the franchise.  And I can’t wait.

Fantastic Beasts And Where To Find Them is in theaters everywhere.

Michael P Coleman is a Sacramento-based freelance writer who has a replica of Harry Potter’s wand sitting on his nightstand by his bed.  Swear to God.  Connect with him at michaelpcoleman.com or on Twitter.