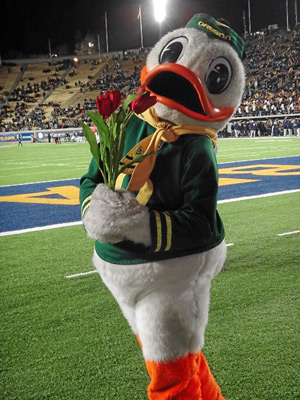 Oregon Ducks Are Sitting Pretty After A Dominant Performance At Cal

Oregon quarterback Marcus Mariota threw for 6 touchdowns and 377 yards with no interceptions. The Ducks defense caused 3 turnovers; including one big interception by Boseko Lokombo, followed by a Mariota pass to Josh Huff for a 35-yard touchdown that shifted the Ducks momentum in the 3rd quarter.

Oregon Head Coach Chip Kelly added, “That two play sequence may have been the game changing part. That’s when it spun our side in a back and forth game. For Lokombo to come up with a huge play, and then we go one play and get a touchdown… I felt like we got a bit of an inch on them.”

Aside from protecting the ball, the thievery ultimately opened up the Ducks’ scoring gates.

Mariota asserted his coach’ comments by adding, “It’s a momentum game and to get it swinging our way at that moment was a big one.”

Coach Kelly praised his Oregon side for the well-rounded performance particularly when it came to securing the football.

“No turnovers on the road is a huge key especially in league games going on the road… you got to protect the football and we did a really good job this week.”

Up next the Ducks, who will most likely hold the number one notch come Monday morning, will host No. 14 Stanford (8-2, 6-1) in Eugene, Oregon as the flock continues their bid for a national championship, while the Cal Bears will have a road match at Oregon State (7-2, 5-2) in Corvallis, Oregon.