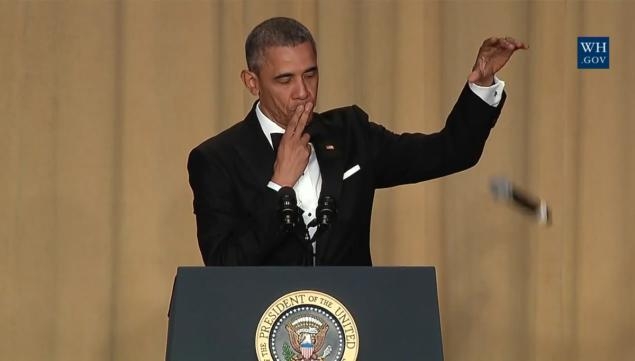 President Barack Obama took his leave of the White House press corps Saturday with a sardonic blast at Donald Trump, the Republican Party and even fellow Democrats in his final tart-tongued stand-up riff for the White House Correspondents’ Association dinner.

Obama took shots at the Democratic race, telling Bernie Sanders, who was in attendance, “You look like a million bucks. Or to put it in terms you’ll understand, you look like 37,000 donations of $27 each.”

Obama ended his speech telling the audience, “And with that, I just have two more words to say — Obama out.” He brought two fingers to his lips, using his other hand to lift a microphone up in front of him and dropped it in a dramatic fashion, referencing when performers intentionally “drop the mic” to emphasize a great performance.

For the complete story, visit CNN.com/Politics.