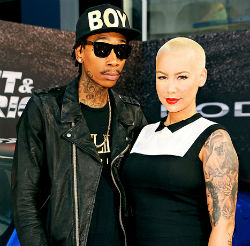 Rapper Wiz Khalifa has married the mother of his 4-month-old son, Amber Rose, in a secret ceremony yesterday July 8, according to an article on USMagazine.com.

Khalifa reportedly announced the wedding via Twitter on July 8, tweeting: “Me and Amber got married today. Wedding’s this fall. Though I’d let y’all know.”