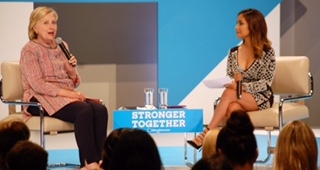 Bostonian Whitney White flew coast to coast to ask Democratic Presidential Nominee Hillary Clinton a question that is on the lips of many of African Americans.

At the close of a Clinton campaign town hall meeting in Hollywood last Tuesday evening, the popular Internet personality asked Clinton how she plans to win the trust of black Americans who are skeptical of her due to her support of a crime bill that caused the incarceration rate among the African American community to sky rocket.

The legislation, the Violent Crime Control and Law Enforcement Act of 1994, was signed into law by Clinton’s husband, Bill Clinton, during his term as president.

“Systemic racism is a real problem. If we are to have a United America we need to admit this,” White said. “We as a people have contributed so much to this country, it was literally built on our backs, but have consistently since its creation have had the least respect. And I know everyone is tired of hearing about this issue, but trust us we’re more tired of having to talk about it.”

White, known by the screenname Naptural85 on social media sites, was one of 100 online creators invited to attend the Digital Content Creators Town Hall at Neuehouse Hollywood. Each of the web figures at the event are known on websites such as Twitter, YouTube, Facebook, and Instagram for various subjects such as beauty, entertainment, and lifestyle. Overall, the group represents 321 million social media subscribers.

White has over 2.5 million online followers who watch her videos or read her posts about black beauty and black lifestyle.

In response to the 30-year-old’s question, Clinton agreed systemic racism against blacks is a problem. The former Secretary of State then highlighted her track record of working against inequality in the black community through her past work with the Children’s Defense Fund, work in South Carolina to keep juveniles from being housed in adult jails, efforts to further the legal services available for black communities, along with working to give kids in Arkansas a better education.

“Because I have a history of working to overcome injustice and systemic challenges like racism doesn’t mean I don’t want to be held accountable by voters,” says Clinton. “The very first speech of this campaign was about criminal justice reform, ending the era of mass incarceration, looking for more programs of diversity, creating more housing, education, and employment opportunities. I am open to and receptive to dealing with the systemic problems that are at the root of injustice, disunity, and inequality in our country.”

The former First Lady and New York Senator also answered a question about reducing student loan debt posed by an unidentified female, African American vlogger. Clinton called student loan debt a terrible burden that interferes with Americans’ dreams of buying a home or starting a business. The candidate offered ideas of how to worsen the financial blow on individuals that need the aid of government dollars to get a higher education.

“One, we are going to refinance,” Clinton said. “Two, we are going to move as many people as possible into repayment plans so that you can pay back as a percentage of your income not on a fixed amount based on an interest rate.”

The politician said if she is elected to the nation’s highest office she will work to put a moratorium on debt for three years for entrepreneurs.

“At the end of those three years if you prove you are really getting something going, and you are employing people we will move toward forgiving a lot of that debt,” says Clinton. “I also want people that are doing national service jobs or public service jobs to have a lot of their debt forgiven. It boils down to something a I really disapprove of – the federal government making money off of lending money to young people to get an education.”

The town hall meeting with the group of mostly tech savvy millennials and Generation Z members was one of three stops Clinton had in Southern California. The other two were fundraisers – one at the home of Napster co-founder and former Facebook president Sean Parker and the other at the residence of investor/philanthropist Marc Nathanson, founder of Falcon Cable.

White’s closing question to Clinton stole the show at the town hall. As soon as the event ended, White was quickly introduced to Clinton for a small chat. Afterwards, Clinton supporters approached White to have discussions.

According to White Clinton said she understood why she posed the query and reinforced her history of working with the black community.

White said she realizes the presidential front-runner has a history of working for equality in the black community, but she added she and her followers still want to know Clinton’s detailed plans to help uplift African Americans.

“In the future how do you plan on working with us? Are you going to be a black community supporter? Are you going to rally with us like you do for LGBT? I didn’t really get my question answered as to what her future plans are,” White said. “She does a great job talking about systematic racism, but does she give calls to action? What do you want people to do to end it? It’s an old story, but we have to keep talking about it because it’s still here.”