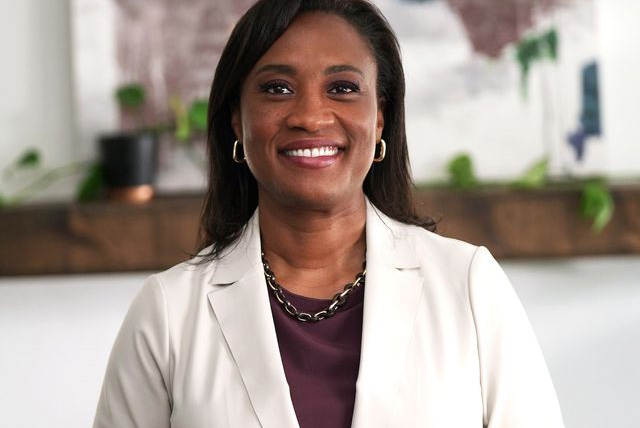 When she was just 30 years old, more than 400,0000 members of California’s largest labor union, SEIU Local 2015, elected LaPhonza Butler to be their president. Known for her outspoken, straight-shooting style as she is for her poise and even temper, Butler has a reputation for being a leader capable of building bridges and driving consensus.

As the head of the largest union of health care workers in the country, Butler led the campaign to raise the minimum wage to $15 in California.

A respected and trusted political strategist, prominent women in California politics have relied on her advice and understanding of the political ground game to get them elected. Among them are Vice President Kamala Harris, Los Angeles County Supervisor Holly Mitchell and state Assemblymember Wendy Carillo (D-Boyle Heights).

Now, at 42, Butler was recently named the President of EMILY’s List, a move that will take her from Los Angeles to Washington, D.C., to head the organization that bills itself as “the country’s largest resource for women in politics.”

She is the first African American CEO of the organization that says its mission is “to elect democratic pro-choice women to office and to add diversity to our political leadership.”

California Black Media spoke with Butler recently about her vision and top priorities for EMILY’s List, her thoughts on how to assist Black and other women of color who feel unsupported by their political parties, and more.

Congrats. How does it feel taking over an organization that has done so much to move the needle for women involved in politics?

I’m very excited. I am only the third president of EMILY’s List in our organization’s 36-year history. It is a real point of pride for sure as well as an incredible responsibility.

When I think about my role at EMILY’s List, I think about my 7-year-old daughter and the kind of community she wants to be a part of, and I see this role as an opportunity to make that possible.

What are some of your short-term goals?

It’s still early. This is just day nine for me, but I can tell you conceptually what I want to accomplish.

I want to build power for women voters and women candidates, ensuring that we are first-in-class as it relates to creating an example of an organization with diversity at its center. I want us to win.

Immediately, I am focused on making sure that we are able to win in Virginia in 2021.

We must hold the Democratic majority and grow the number of Democratic pro-choice women that are in the Virginia statehouse. We have fantastic candidate for Lieutenant Governor in Hala Ayala. She will be the first Afro-Latina to hold that office if we are successful.

Also, there is anti-abortion legislation moving forward in states across the country. We are doing the work to engage the electorate at the state and local levels. It is important for us to push back on restrictions on a woman’s right to make her own health care decisions.

Building partners. From working with unions in California, I realize the importance of partnerships, of forming coalitions.

When we worked to raise the minimum wage, we included small business partners. We included workers.

What I would like to do with EMILY’s List is to make sure that we are throwing the doors open for every woman – no matter what her financial background may be. If she wants to serve, she can find the resources, training and support that she needs at EMILY’s List. I want to do that in partnership with organizations like Higher Heights, Emerge, Voto Latino and #VoteProChoice.

What do you want EMILY’s List to represent for women and girls across America?

I want it to mean that every woman can belong anywhere she chooses and at any decision-making table where she wants to be, assured that her voice will be heard.

I also want the organization to be able to communicate clearly that whether you are a woman of color, or from a working-class background, or immigrant woman, your place in electoral politics is normal. You’re not a groundbreaker, not a celling breaker. You belong at those tables.

What’s your message for men?

I want men to know that they, too, have a place and a role in ensuring that their wives, mothers, sisters, daughters and aunts are capable of being strong leaders, not just in their families, but in the halls of government.

I want men to know that their resources are welcome in supporting organizations like EMILY’s list to help make the dreams their family members’ dreams come true.

Black women overwhelmingly vote for Democratic candidates. They are leaders and grassroots organizers, and they are the most loyal voting bloc in the party. Yet, Black women candidates often point out that they are not always supported with the levels of enthusiasm, endorsements or funding they deserve. What are your thoughts about this problem?

They are legitimate concerns for Black women, specifically, and women of color, generally. Their voices are the last heard if heard at all. Their experiences are the least valued if valued at all.

I can surely appreciate and attest to their leadership.

As it relates to EMILYs list, I want to hear those concerns and I want to understand them. I want to continue to support Black woman, women of color and all women.

At the same time, I would invite people to take a look at EMILY’s List and the work we have done to support Black women like U.S. Congresswomen Lucy McBath, Lauren Underwood or Jahana Hayes. These Black women, who ran and won in majority White districts — White Republican districts. They all had the support of EMILY’s List.

The new mayor of St. Louis, Tishaura Jones, for example, has also benefitted from the work of EMILY’s List.

Emily’s list has a strong history of being an organization created to diversify women holding elected office. And we can do more to work inside a system that wasn’t built for us. A system that we forced our way into and want to continue to be a part of.

I’ve heard you say in other interviews ‘when women win, we all win.’ What do you mean?

What we know about women is that when they go to the ballot box, they carry their whole families. They carry their children, their husbands, their mothers, their fathers. They do not only carry those persons as individuals; they also carry their concerns. I made that statement and I believe that when women are in elected office, the choices that they make are representative of entire communities. That is the way that we lead our families. That is the way we lead our civic organizations and churches.

Do you have any advice for women who are interested in running for elected office but don’t know how to get started?

I would say reach out to EMILY’s list if she is looking for a way to get started. We actually have an online community called Run to Win that is made up of tens of thousands of women who are contemplating this very question. Our staff gives them advice and I think the most powerful part is that they give advice to each other based on real-life experiences.

Even if they have doubts, those women should run anyway. Our Congress and state legislatures are filled with women who didn’t win the first time.

You went to an HBCU, Jackson State. Does that experience play a role in shaping who you are as an organizer, visionary and person?

I wouldn’t be who I am today or where I am today but for my experience at Jackson State. My fellow Tigers and the professors that I had who were SNCC or CORE organizers, who may have spent their young adulthoods going to jail fighting to expand the right to vote. They took those experiences and poured them into us in the classroom. They provided the intellectual rigor of higher education and combined it with the civic responsibility to continue to push for better, to fight when there is struggle and to lead when no one else will stand.

It is more than just an institution of higher learning. It is a space where you really do come into the fullness and beauty of all that it means to be a Black person in this nation.