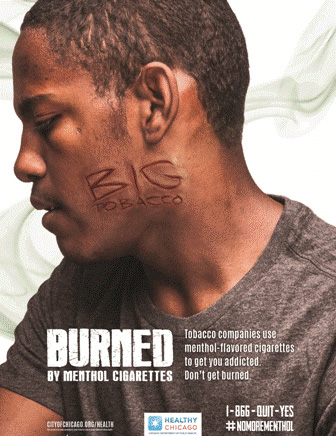 Big Tobacco
The African American Tobacco Control Leadership Council (AATCLC) strongly supports any action the U.S. Food and Drug Administration (FDA) proposes to take that will end the availability of menthol cigarettes. Additionally, the AATCLC strongly encourages the FDA to include other flavored tobacco products, including cigars, in this ban. It has been shown (Ambrose et al 2005) that over 70% of African American youth who smoke are smoking menthol cigarettes. This same group has a heavy use of flavored cigars. Additionally, it has been documented that 70.1% of white youth who smoke are also using flavored cigars.
Menthol and flavored tobacco products are driving tobacco death and disease rates nation-wide; while the use of non-flavored tobacco cigarettes has been decreasing, the use of menthol cigarettes, flavored cigars and e-cigarettes, especially among all youth and communities of color, is on the rise (Villanti, 2016).
It has been by corporate design and not coincidence that the alarming statistics have arisen from the predatory marketing of these products in predominantly poor Black communities, where there are more advertisements, more lucrative promotions, and cheaper prices for menthol cigarettes compared to other communities (Henriksen et al., 2011; Seidenberg et al. 2010). It has been by design that Black people continue to be disproportionately targeted by an industry that has profited off the deaths of 45,000 Black people annually.
It has been almost ten years since President Barack Obama signed the Family Smoking Prevention and Tobacco Control Act (ACT) of 2009. It was back then that the FDA was given the authority to regulate tobacco products. As its first task under the ACT the FDA banned all flavored cigarettes, except those flavored with menthol. The AATCLC and others recognizing the social injustice of “protecting” menthol knew, as the Honorable Joseph Califano so eloquently put it, that excluding menthol from the list of prohibited was in effect, “relegating Black children to the back of the public health bus.”  Mr. Califano knew as we all did that the reason Newport Cigarettes were so “popular” with the Black Community was because these products had been literally dumped in our communities for decades, given freely away to children as young as nine. Comedian Dave Chappelle, in a not so comic way, has talked about his own personal experiences of being given free cigarettes at the age of 14 while living in Washington, D.C.
The FDA is expected to begin the steps to right this wrong by proposing to ban menthol cigarettes altogether, while also imposing new restrictions on the sale of flavored e-cigarettes at gas stations and convenience stores. The AATCLC supports these efforts and we are happy to see that after our ten long years of fighting in the trenches, the FDA is being responsive to our call for action at the federal level. Such action supports all the policy work currently underway in local jurisdictions across the country.
If the FDA truly wants to protect the public health, and we believe this to be the case, then it is imperative that menthol cigarettes and flavored cigars be restricted and recognized as a social injustice, an issue that has a disproportionate impact on poor communities, marginalized groups, and especially communities of color. Though historically, the tobacco industry has tried to use Black leaders to blunt meaningful tobacco public health policy, the AATCLC is here to say, “It’s a new day and it’s no longer business as usual,” because we are not alone. We stand with NAATPN, the NAACP, the National Urban League, and Delta Sigma Theta Sorority, Inc., all of whom have publicly called for a ban on menthol cigarettes and other flavored tobacco products. We ask the FDA to stand with us, too.
Getting rid of all flavored tobacco products, especially menthol cigarettes, flavored cigars, and flavored e-cigarettes, is a single step the FDA can take to protect our children, ALL of our children. So, Newport cigarettes and all you other flavored tobacco products: You’re Fired!
Click here to see more.
Submitted by the African American Tobacco Control  Leadership Council (AATCLC)