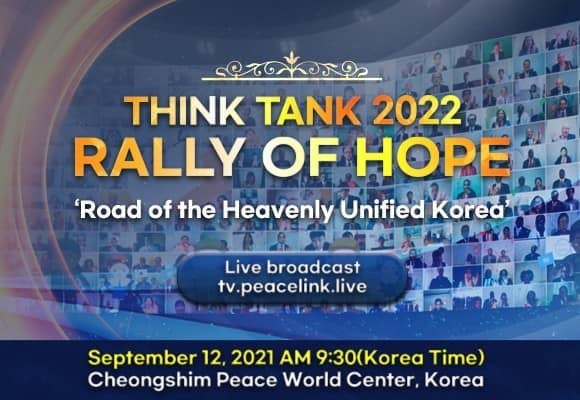 A wide range of challenges stand in the way of building a stable and relatively peaceful global order for the 21st Century. Recent events related to the U.S. withdrawal from Afghanistan underscore this fact.

Of critical importance to the geopolitical dynamics of our time is the ongoing crisis on the Korean Peninsula, which impacts East Asia and the rest of the world. While efforts toward peace have prevented another war in Northeast Asia, the potential for conflict still remains and would involve the U.S., China, Russia, and Japan. It is time for a new strategy to move toward reconciliation and cooperation on the Korean Peninsula.

Who: Think Tank 2022 Rally of Hope online is sponsored by the Universal Peace Federation (upf.org)

What: Inaugurated in 2020, the Rally of Hope is a series of live-streamed online productions using advanced augmented reality technology to connect millions of global viewers. Featuring prominent world leaders and captivating entertainment, the Rally of Hope is uplifting, actionable and faith-based.

Why:  This new and unique program empowers the ordinary citizen who seeks meaningful change in their personal life, family, community, and even globally, by participating in a movement which transcends political, religious, racial, and ideological boundaries.

Previous Rallies of Hope have provided a platform for top experts to speak about the complex issues facing our planet, including: climate change, geopolitical hotspots, challenges of the coronavirus pandemic, honoring veterans of the Korean War on its 70th anniversary, the role of faith in peacebuilding, and much more.

Where: The Think Tank 2022 Rally of Hope may be accessed through any smart device, streaming live on social media platforms and at http://www.rallyofhope.us