“A forced government shutdown on Donald Trump’s watch could cost the economy nearly a billion dollars each day. If that wasn’t enough, federal employees will be furloughed, government services many families depend on will be put on hold, and members of the military will be expected to work without pay,” said DNC Deputy Communications Sabrina Singh. “While Republicans point fingers, every day Americans, many of whom are already hurting, are bracing for the devastating impacts of a potential shutdown.”

“Arizona’s natural treasures reach as far north as the Pipe Spring National Monument near Utah and as far south as the Coronado National Memorial near the U.S.-Mexico border. If Congress is not able to pass a spending bill by Friday’s deadline, all would close. […] After 2013’s government shutdown, Arizona lost out on $27 million of revenue, according to the National Park Service, with the Grand Canyon alone amounting for $17 million of it.”

“The Department of Finance says there are about 252,000 federal employees in California. Economist Robert Kleinhenz with Beacon Economics says those workers could feel the most tangible effects of a shutdown, should their paychecks be delayed.”

COLORADO: KDVR: How Colorado would be impacted if there’s a federal government shutdown

“Many of the 6,000 employees would be forced to work without pay or stay home and not get paid during a shutdown. Employees said during the last shutdown the money was never made up.”

FLORIDA: News Talk Florida: Federal Workers In Florida Are Hoping There Is No Gov’t Shutdown

“As of now, lawmakers in Washington are scrambling to find a way to pass a continuing resolution that would keep federal offices open nationwide as the midnight Friday deadline looms large. While both Republicans and Democrats try to figure out how to pass a bill to keep the lights on in Washington, over 82,915 federal workers in Florida are on the edge of their seats.”

“The threat of a potential shutdown of the federal government is being closely monitored by leaders on Beacon Hill. Gov. Charlie Baker’s budget office is already reviewing past contingency plans created in the event of a shutdown, according to his aides. […] ‘It’s not just about the shutdown,’ he said at the time. ‘It’s about the collateral impact that the shutdown can have on local businesses and small businesses that rely on that tourism traffic to be successful.’”

MINNESOTA: WCCO: How A Federal Government Shutdown Will Affect Minnesota

“It’s beginning to look like a federal government shutdown is more and more likely, and it could have dramatic effects in Minnesota. […] But thousands of federal workers would be furloughed, national parks and museums would close, and you won’t be able to get a passport.”

“If a shutdown does occur, the nearly 11,000 federal civilian employees and an unknown number of federal contractors in Nevada would likely bear the brunt of the closure. Past government shutdowns have seen workers at federal agencies furloughed and federal contractors sidelined without pay.”

OHIO: The Record-Courier: Federal government shutdown possible – why should you care?

“If this round is like the one five years ago, that means Ohio’s National Park Service areas would be closed. In 2013, for example, parking lots in Cuyahoga Valley National Park were blocked. […] If the shutdown lasts more than a couple days, applications for passports and visas are likely to be halted. Those reliant on TANF (Temporary Assistance for Needy Families) or WIC (Women, Infants and Children) funds could see changes at the local level.”

OKLAHOMA: News 9: Oklahomans Fear Health Insurance For Children Could Be Taken Away

“With another government shutdown looming over talks in Washington, fears that health insurance for millions of children could be taken away are mounting. Those insurance programs are called the Child Health Insurance Programs, or better known as CHIP, and the funding may not last through the weekend.”

“If it happens, the effects would ripple through the Lone Star State’s 15 major active-duty and reserve installations, a federal golden egg that pumps an estimated $150 billion a year into the economy. Shutdowns cracked it in 1995 and 2013 by sidelining tens of thousands of workers.”

VIRGINIA: NBC 12: How the Government Shutdown Will Impact Virginia

“The impending government shutdown set for midnight Monday will have the largest impact on civilian Department of Defense employees, with paychecks potentially delayed for active military personnel if the Congressional deadlock continues for more than a week.” 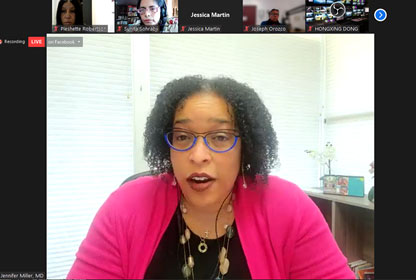