In February, U.S. Senator Kamala D. Harris (D-CA) held a roundtable discussion (02.18.2020) in partnership with the California Breastfeeding Coalition in San Francisco to discuss the Black maternal mortality crisis and her legislation to address persistent biases and shortcomings in our nation’s medical system. Also present at the roundtable was California Surgeon General Dr. Nadine Burke Harris and moderator Devona Robertson, Chair of the California Breastfeeding Coalition along with a host of health providers, community members and maternal care advocates. Chief Editor of THE HUB Magazine & Founder of Sacculturalhub.com, Pleshette Robertson was in attendance and had the opportunity to briefly interview Senator Kamala Harris – click here for the interview.   To see all photos from the roundtable event click here.

“During Black History Month, it is important that we not only celebrate the rich legacy of Black Americans, but also acknowledge the historic struggles within the community – many of which persist today,” said Sen. Harris. “Even as advancements in medicine improve outcomes, Black women continue to face a maternal mortality crisis. Every day that we fail to confront racial disparities and injustices in America, we are failing our families and future generations.”

“In our struggle, we need to remind ourselves that we are not alone,” urged Senator Harris. “When we are talking about black maternal mortality, we are talking about the fact that black women die at three to four times the rate of other women in America in connection with childbirth.” The issue has two parts: racial bias and unique stressors that black women in America face: housing, pay and childcare inequity. This is not just about bias among medical health professionals, but also bias in every system that exists. These various issues, when combined, contribute to the mortality rate of black women.

Senator Harris is authoring the Maternal Care Access and Reducing Emergencies (Maternal CARE) Act (reintroduced in May 2019). The act has three elements to it:

Senator Harris explains, “it hurts when you are not taken seriously. Especially when you know your facts, when people don’t believe you and you have to prove what you know instead of people just taking you at your word.  It’s at the core of a system that is corrupt frankly.” The community professes to be about caring for people, making them whole, and giving them care, and yet it conducts itself in quite the opposite way, which is to suggest they are not whole and undeserving of care.

Surgeon General Burke Harris shared, “just like our broader American society, our healthcare system is built on a history of racism and oppression. We can’t separate that.“ The main reason that hospitals desegregated was due to the passage of the 1965 Medicare/Medicaid Act, which required medical facilities receiving federal dollars to integrate. What needs to happen in America today is to change hearts. Burke Harris believes the best way to do this is to change policy. “We can change policy, we can change requirements, and that changes outcomes, and hearts and minds change as a result of the different outcomes.”

At the roundtable, many maternal health providers, advocates, and mothers shared their stories and how they are contributing to improve maternal care and mortality in California:

After challenges with two of her four pregnancies, Brandi, a lactation consultant at West Oakland Health Center, made it her personal mission to make it known about the health disparities of black women and children, and teaching self-advocacy.

As she grew in knowledge through each pregnancy, she still experienced mistreatment.

“It’s so interesting that you can know so much and you can know who you are as a person, and as soon as someone comes in with more power and authority, that you think – they are a doctor in a white coat – how they can change you.”

She felt pressured in how to care for her baby that were contrary to her beliefs and her knowledge, and it was difficult to stand up for herself. Through her experiences, she is motivated to equip black mothers with knowledge so they may be confident and better able to speak up and advocate for themselves and their babies.

Another lactation consultant remarked that when she started in her hospital she was the first black lactation consultant. She had to prove her knowledge; pediatricians did not trust her judgment at first. She shared, “we should not have to roll out our resumes or our credentials when we walk into a doctor’s office, clinic or hospital.”

Programs mentioned that will undoubtedly play a major part in educating as well as assisting Black mothers that include:

In summary, we need to do more than just raise awareness. We need to have accountability and training for our medical professionals on the specific needs of the black community. It should be enough that black women and babies are dying.

The 3rd annual national Black Maternal Health Week (BMHW) campaign, founded and led by the Black Mamas Matter Alliance, will be a week (April 11-17, 2020) of awareness, activism, and community building intended to: deepen the national conversation about Black maternal health in the US; amplify community-driven policy, research, and care solutions.  Activities during BMHW are rooted in human rights, reproductive justice, and birth justice frameworks. 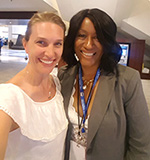 Contributed by Heather Neiman – Writer and Graphic Designer for THE HUB Magazine/Sacculturalhub.com and Owner of Tingible Design  – wife and mother of 3 teenage children (2 daughters and 1 son), middle school art and technology teacher, and resident of Peachtree Corners, Georgia.