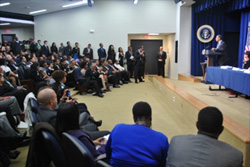 The White House also released a report entitled, “The President’s Agenda and the African-American Community.” The report highlights how the Obama Administration has reformed investments to reward work, improve education and increase college access and affordability, keep Americans in their homes, increase access to health care, and invest in small businesses have made a significant impact in African American Communities.

President Obama dropped in for a surprise visit. In his remarks, the President asked for leaders to listen to the dialogue and engage with leadership around issues related to African American communities. President Obama urged everyone to, “participate here in a spirit of persistence, determination and unity,” in order to “emerge from these difficult economic times stronger than we were before.”