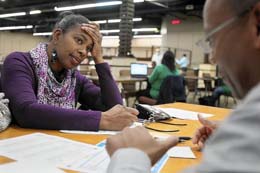 Ahead of Monday’s Obamacare enrollment deadline, fewer than 3% of Covered California enrollees have identified themselves as African American, but 17% of the demographic in the state are uninsured.

By Soumya Karlamangla and Chad Terhune

Very few African Americans have signed up statewide, and there’s not much time to address the lackluster turnout. Wednesday, state officials reiterated that Monday remains the deadline for open enrollment. But the state will give Californians until April 15 to finish their application if they start it before midnight Monday.

Thus far, fewer than 3% of health plan enrollees identify themselves as African American, and that number hasn’t budged in weeks. About 17% of African Americans in California are uninsured, and overall they constitute about 7% of the state’s population.

But the state’s struggles at reaching uninsured Latinos have drawn far more attention and criticism among lawmakers and health law supporters. The pace of Latino sign-ups has picked up in recent weeks amid a multimillion-dollar marketing blitz. Overall, consumer interest is running high ahead of the deadline, with nearly 40,000 people enrolling Monday and Tuesday, the state said.

“The improving Latino numbers warm my heart,” said Robert Ross, a Covered California board member and chief executive of the California Endowment. “The African American numbers are really disappointing and disturbing.”

At last week’s exchange board meeting, Ross asked state officials to examine the outreach to African Americans and any lessons to be learned before enrollment opens again in November.

Covered California has given grant money to numerous nonprofit groups and community organizations active in the African American community for education and enrollment efforts. The exchange also worked with a state lawmaker and labor leaders to open a mall kiosk for consumers in a predominantly African American area of Los Angeles in November.

At enrollment rallies, Peter Lee, executive director of Covered California, has often invoked the words of the Rev. Martin Luther King Jr. on the struggle to overcome inequality in healthcare.

But some health-policy experts and community leaders say the low numbers underscore the challenges in expanding coverage to a historically underserved population. Overall, more than 1 million Californians have picked a health plan through the state exchange as of mid-March.

“It’s not easy,” said Dr. Brownell Payne, a physician who works with Crenshaw Health Partners, a state-certified enrollment group. The exchange “has done a masterful job in terms of encouraging the outreach educators to go to the right spots, but the numbers of people to reach are huge.”

Last weekend, the entrance to Faithful Central Bible Church in Inglewood was decorated with rainbow arches of balloons for an enrollment event. Disc jockeys from a local radio station played hip-hop music in the courtyard. Inside the massive church, about 100 people signed up for coverage.

Church member Beverly Billingslea, 63, selected a Silver policy with L.A. Care Health Plan at the event and qualified for a federal premium subsidy that made it more affordable. She has gone without health insurance for more than a decade, getting by with an annual exam at a free clinic. She said she was relieved to gain full coverage.

Carla Singleton, a marketing manager for L.A. Care, said the health plan advertised the enrollment event through the church because religious organizations are often trusted in the African American community. She said more events are planned before Monday.

She said the state’s attempts to ramp up Spanish-language marketing may have taken away from outreach to other minorities who are likely to fall through the cracks. “From Covered California all the way down, there just hasn’t been a lot of outreach” in African American neighborhoods, she said.

Less than a mile away from the L.A. Care event in Inglewood, other enrollment organizers tried to drum up interest for Obamacare inside a nightclub. But the public turnout there was sparse.

Enrollment counselors sat in the black leather booths at the Savoy Entertainment Center waiting for people to show up. The event featured free lunch, a comedian and a mock “Jeopardy” game show on Obamacare basics. The speakers included a White House official and a representative of Enroll America, a nonprofit group promoting the Affordable Care Act nationwide.

Amid the jokes and games, however, health law supporters stressed how access to timely medical care could improve the lives of many African Americans who suffer from diabetes, heart disease and other chronic conditions.

“When we think about what this law means for our community,” said Etoy Ridgnal, director of African American engagement for Enroll America, “it really can be the difference between life and death.”