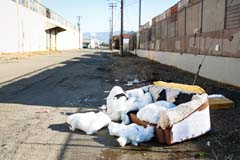 New Reward Program Unveiled
Who: Councilmember Allen Warren & City Officials
What: Launching RID – Report Illegal Dumping campaign. Rewards between $500 and $1,000 are now available to citizens who report illegal dumping.
When: July 16, 2014 11:00 a.m.
Where: Specific location will be an illegal dump site and will be sent out July 14, 2014.
More Info: The City of Sacramento is cracking down on illegal dumpers. The RID campaign encourages citizens to report illegal dumping and offers generous rewards if the information leads to a citation or a conviction.
City staff will display surveillance equipment used in the last three months to identify and catch illegal dumpers. There will be a photo array of some of the dumping caught on camera.
As part of the event, a city crew will clean up the dumpsite.
Live interviews for noon newscasts can be accommodated.
Visuals: Illegal dumpsite, clean up in-progress, city surveillance cameras, photos from surveillance cameras
Multilingual: A City official fluent in Spanish will be available for interviews.