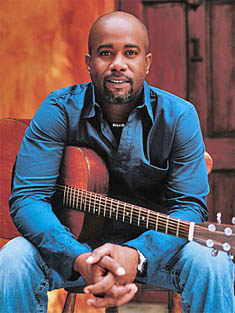 Grammy winner Darius Rucker spoke to veteran reporter and anchor Dan Rather as part of the newsman’s new AXS TV show, ‘The Big Interview,’ which features wide-ranging interviews with celebrities from across the entertainment field. The episode is set to air on Monday (April 21).
Their candid discussion includes Rucker’s thoughts on his critical success and popularity in the country music community, views on the state of country music today, and the importance of family themes to his music.
The former Hootie & the Blowfish front man further discusses his transition from rock to country, as well as his childhood growing up in Charleston, S.C.
R&B icon Aaron Neville is set to appear with Rather on April 28.
Check out The Boot for more, and an exclusive clip from the interview: Darius Rucker Gives Dan Rather ‘The Big Interview’ – Clip |
http://theboot.com/darius-rucker-dan-rather-the-big-interview/