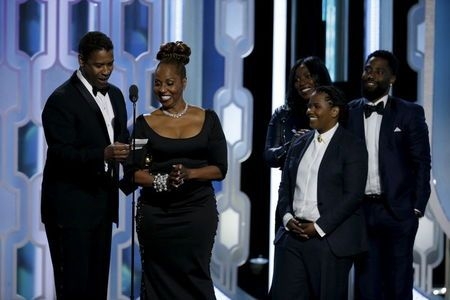 Denzel Washington (L) and his family are seen on stage after Washington won the Cecil B. Demille Award at the 73rd Golden Globe Awards in Beverly Hills,

Oscar-winning actor Denzel Washington joined the ranks of Steven Spielberg, Martin Scorsese and Robert De Niro when he was awarded the Golden Globe for lifetime achievement on Sunday – only the third black actor to be recognized in the more than 60-year history of the award.

Washington, 61, was presented with the Cecil B. DeMille Award at the Golden Globes ceremony in recognition of his work in front of and behind the camera.

Washington accepted the award flanked by his wife, Pauletta, and three of his children, but said he couldn’t read his prepared speech because he had forgotten his glasses.

For the complete story, visit YahooNews.com.