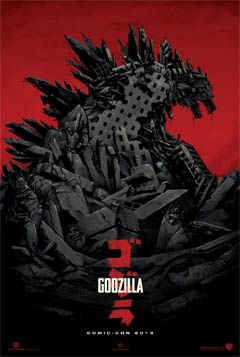 I think I speak for every living, breathing moviegoer and Godzilla fan in saying we wanted a movie where a lot of stuff gets torn up and the special effects are updated, that made us shudder a little during the action sequences and cheer a lot for the big green guy.  I unfortunately can still remember Hollywood’s latest attempt to resurrect Godzilla.  (If you can’t, praise Him and lift Him up!)

With this new Godzilla movie, directed by Gareth Edwards, I’m happy to say that Warner Bros. and Legendary Pictures got it right.  The movie struck all of the right notes.  You are forced to wait, agonizingly, for about an hour before you see Godzilla in all of his pumped up glory.  He’s been working out since you saw him last, so brace yourself.  Before the big reveal, you’re treated to a Spielberg-esqe build-up, catching a shadow here and a flick of the tail there.  In fact, there are homages (some subtle, some not so) to two of Steven Spielberg’s movies in Godzilla:  Jaws and Jurassic Park.

If you sit down to watch Godzilla looking for complex plot or character development, you’ll be in the wrong theatre.  After a bit of a shocker a few minutes in, it’s pretty much par for the course for a movie of this genre:  humans make mistakes, nature strikes back, monsters fight and tear stuff up.  There’s a bit of a shark jump about a third of the way in involving a kid who’s been separated from his parents, but it occurred to me that we in the audience had agreed to completely suspend belief when we showed up for a movie about a huge, radiation-mutated reptile, so what the heck?

The stars of the show are Godzilla himself and the amazing special effects.  The filmmakers managed to update the overall look of the monster and the movie, while expertly using CGI and motion capture technologies to retain a lot of the feel and spirit of the earlier films.

Godzilla’s crushing the box office, and not surprisingly Warner Bros. and Legendary Pictures have already announced plans for two sequels.  I’m thrilled about that — the popcorn flick is officially back!