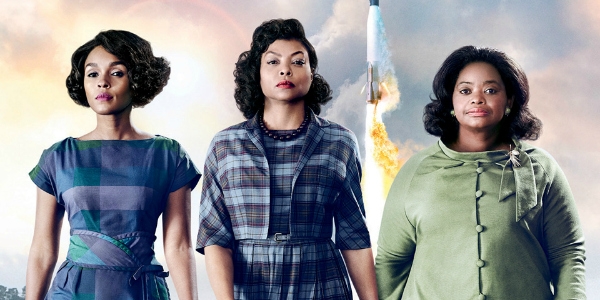 I’m tempted to tell you that the exceptional new Hidden Figures is the best movie I’ve seen this year.  Since 2017 is just out of the gate, that comment might be seen as more than a little glib.

So I’ll say this:  Hidden Figures is the best movie I WILL see this year.

Usually, period pieces that are based on history don’t hold my attention, largely because we already know how the movie’s going to turn out.  (We KNEW the Titanic was iceberg-bound and doomed, right?  So who really cares about Leo DiCaprio’s “I’m the king of the world!” moment?)

With the story behind Hidden Figures, we already know that Neil Armstrong helps America win the space race, and that he walked on the moon eight years later.   What most of us didn’t know was that a group of black women — “Colored Computers” they were called — were largely responsible for getting him there.  Told from their perspective, THIS period piece kept me, literally, on the edge of my seat through the film’s final act.

Hidden Figures is brimming with revelatory performances.  While Octavia Spencer didn’t surprise in her Golden Globe-nominated performance — she’s always brilliant — singer Janelle Monae is shockingly captivating as a 1961 housewife and mathematician who wants to be an engineer.  At the time, there were no black female engineers at NASA.  If you’re not on Team Monae already, after you see this film you’ll join the growing chorus of people who recognize her as Tinsel Town’s newest ingenue.

Similarly, Taraji P Henson, who plays the film’s lead, is phenomenal as a math wiz who’s tapped to join a group of all-male, all white mathematicians in helping the United States win the space race.  In 1961, the Russians are ahead, and NASA needs the best of the best to join the team.  The science to get man into space and back simply didn’t exist at the time, so Taraji’s character puts her head to the grindstone as she and her colleagues are charged with literally creating a path to the stars.

Henson proves she’s a brilliant character actress, as there’s not a hint of Empire’s “Cookie Lyon” — or any other role she’s ever played — to be found.  Her character is soft-spoken and gets her point across in a modest, understated way, but when she finally lets lose, hold on to your seats.  I choked up as Henson’s character felt the inequities that African Americans of that era had to tolerate every day.  After seeing the film, I’m surprised she didn’t receive a Golden Globe nomination, but hope to hear her name when Oscar nods are announced.

Other stars that deliver exceptional performances are Kevin Costner (you’ll never look at a civil rights movement-era “Colored Only” sign the same way again), Kirsten Dunst (who plays against type here, as Spencer’s bigoted boss), and Mahershala Ali, who follows-up his impressive turn in the Golden Globe-winning Moonlight with a nuanced performance that stole the heart of every woman in the theatre.

Recently on CBS’ The Talk, comedian (and wife-in-my-head) Sheryl Underwood said Hidden Figures was a movie that wasn’t just for women, but rather for every American.  I’m not one to disagree with my spouse, let alone in public, but even that perspective is limiting when discussing this exceptional film. To my mind, Hidden Figures is for everyone who loves great movies.  Go see it.

This review was written by Sacramento-based freelancer Michael P Coleman. Connect with him at michaelpcoleman.com or on Twitter.