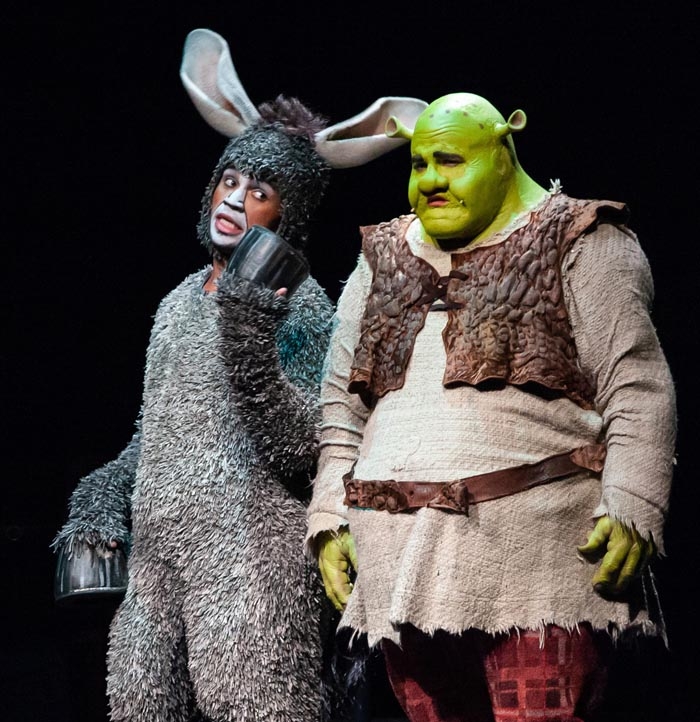 It’s one of the lines that brought the house down during last night’s premiere of Shrek the Musical, a subversive fairy tale about acceptance and finding the beauty within.  It’s one of dozens of times both adults and children were doubled over laughing during this riotous production — and my nose isn’t growing an inch as I write that.

Based on the Oscar-winning animated film, Shrek the Musical brings the beloved Scottish brogue’d ogre and his buddy Donkey to life on stage.  It’s no easy feat to breathe life into two-dimensional animated characters, especially when they were originated by Mike Myers and Eddie Murphy.  In his Broadway at Music Circus debut, Jacob Keith Watson made looking and sounding like a singing green ogre look easy.

Similarly, Donkey is hysterically portrayed by Andre Jordan, who may have stolen the show had the rest of the cast not been so superb.  Kristen Beth Williams is an excellent Fiona, Tyler Jones had me rolling as Pinocchio, and Steven Strafford, returning to Broadway at Music Circus, was excellent as Lord Farquaad, a funny foil to the big green guy.

But Strafford had an unfair advantage.  In fact, many of the cast of Shrek the Musical did. 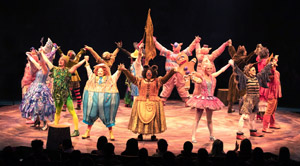 The diminutive Lord Farquaad’s costume is Tony Award-worthy, and he was one of many characters that got their first chuckle — if not outright guffaw — before delivering their first line.  I was rendered teary-eyed every time the Gingerbread Man was on stage.  The show’s costume designer, Mary Folino, is a genius. 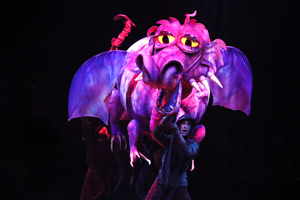 You have to see the Dragon…and hear her.  It takes five performers to bring her to life, including stage and screen veteran & Broadway At Music Circus alumna Jennifer Leigh Warren.  The quintet’s gifts are obvious, and I need an album from Warren.

Pay rapt attention to the songs in this production, as there are brilliantly humorous lyrics hidden  in this show’s standard fairy tale fare.  Don’t blink or you’ll miss a MAGA reference in addition to pseudo tributes to other legendary Broadway musicals like The Lion King, Dreamgirls, and Gypsy.  The very young ones may miss them — in fact, Shrek the Musical is rife with adult-targeted jokes.  I’ll think of one of them, and smile, the next time a bug hits my windshield.

Those jokes aren’t adult-themed, mind you: this show is decidedly family-friendly.  In fact, there’s even a few flatulent-esque funny moments for the kids (off all ages…what’s become of us that we all think these stinkers are so funny?).  There’s also a special program booklet for children who attend the show.

Speaking of kids, I have to give a shout-out to the young Sacramento area actors who round out Shrek the Musical’s impressive cast: Ella Bleu Bradford as Teen Fiona, Mia Fisher as Young Fiona, and Michael Stark as Young Shrek.

With Shrek the Musical’s strong message of inclusion, I wondered whether Broadway At Music Circus intentionally booked the engaging show during Pride month.  At any rate, I’m happy that their 2019 season has started, and I’m thrilled to be reviewing their season for THE HUB again.  In other words:

Shrek the Musical runs through Sunday, June 16 at the Wells Fargo Pavilion.  Tickets start at $40 for kids 4-12 and $45 for adults, and are available by phone at (916) 557-1999, online at BroadwaySacramento.com, or in person at the Wells Fargo Pavilion Box Office, 1419 H Street in Sacramento. Evening performances are daily through Saturday, June 15; matinee performances are Thursday, June 13 and Saturday, June 15 at 2pm and Sunday at 3pm.  For more information, visit BroadwaySacramento.com