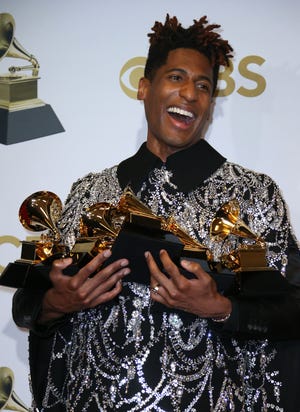 From USAToday.com:
“Jon Batiste ruled on a Grammys night that celebrated young hitmaker Olivia Rodrigo and embraced the funk of Silk Sonic.

Batiste, who went into music’s biggest night with a leading 11 nominations, won five trophies including album of the year – the top prize of the night – for ‘We Are’ at Sunday’s 64th Grammy Awards. Silk Sonic, the super duo of Bruno Mars and Anderson .Paak, took home record and song of the year – as well as R&B song and performance Grammys for ‘Leave the Door Open.’ And Rodrigo was named best new artist as part of her three-win day, which also included best pop vocal album for ‘Sour’ and pop solo performance for her hit ‘Drivers License.'”