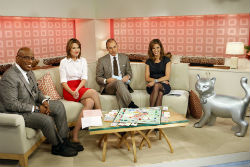 The votes are in and Monopoly fans have made their choice clear — the iron is out, and the cat is in.

According to a press release issued by Hasbro, after a month of voting on Facebook, the cat has been chosen and will become the neweest addition to the classic game, beating out other token options of toy robot, guitar, helicopter and diamond ring by receivign 31 percent of fan votes.

And in the vote to see which classic token would be saved from jail, sadly it was the iron that fell short with only 8 percent of the fan vote.

Hasbro will reportedly replace the iron with the cat token on the Monopoly production lines immediately, so if you want to scoop up a copy of the game with all the classic tokens, do it soon. The new Monopoly game featuring the cat token will arrive on store shelves in mid to late 2013.