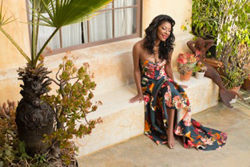 Natalie Cole Performs Her Hits and Songs from Her New Spanish-Language Album with the San Francisco Symphony, November 25 at Davies Symphony Hall

Tickets are on sale now at www.sfsymphony.org, 415-854-6000, and at the Davies Symphony Hall box office on Grove Street between Franklin Street and Van Ness Avenue.

Cole began her career in 1975 when she released her debut album, Inseparable, which won her the first two of her nine Grammy Awards (for Best Female R&B Vocal Performance, and Best New Artist). She overcame her long struggle with substance addiction in the mid-1980’s and went on to her biggest commercial success, 1991’s Unforgettable, With Love, featuring the first of her posthumous duets with her father, the legendary Nat “King” Cole. Her memoir, “Love Brought Me Back,” chronicles her journey from loss and recovery to joy and success following her 2009 kidney transplant.